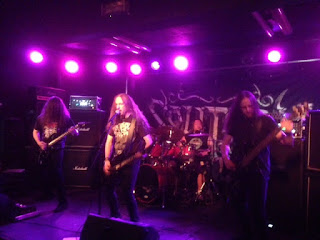 16 months after their first tour of Holland Solitary returned for a long weekend with 4 shows in the country. I was glad being able to help out and receive them at home after the Musicon gig and curious at the same time how this visit of The Hague would go down. Due to a Threshold DVD filming gig in nearby Zoetermeer I could not pull a small crowd for one, but Magchiel joined me as he liked them last year as well. Still the evening promised to be Ok as the two supports sounded interesting. Openers of the evening were Remain Untamed, who played a thrash metal crossover style according to the FB event, I quite liked their set and especially instrumentally they appeared a strong unit. The voice for me could have been more thrashy and less core, but that is personal taste. Their covers of DRI and SOD sort of hinted to their direction in metal.
Next band PPTA opened this summer for two local bands on their CD release party. At the time I quite liked their show, but you can't comment on them without mentioning the wrestling ring. I still not figured out how much that adds, although it gives them something own. Further I believe that their decision to give the referee a smaller role paid off. Musically they play thrash metal and are one of the many newer Dutch bands doing so at a rather high level. Good songs and catchy melodies. My favorite is the Sumo Wrestler where the heaviness just pours out. This band definitely did warm us all up and got me ready for Solitary. 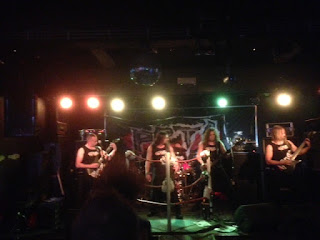 Solitary back in Musicon so the first thing one does is comparing. This year we had two supports so a shorter set. This mainly meant that the big four covers were dropped. To get more on their big four background read the book "I promise to thrash forever". This year there was the release of the 20th anniversary of their record Nothing Changes on Dutch label Doc Records. So we got some songs from that album, but also Requiem and The Diseased Heart of Society were visited. The cover that stayed in the set was Into The Pit, but that is no surprise as they recorded it on Requiem. Last year I mentioned to them missing Anthem of Regret in their set. This slower and heavier banger for me does wonders in an overall fast set. They did remember my comment and decided to include it tonight and even better dedicate the song to me. Thanks for that guys and yes it worked wonderfully well live I thought. Their one hour set flew by and before we knew it we were bringing  amps back to the black box. For me Solitary proved again to be one of the more exciting current thrash metal bands. Still there must be people around who prefer to pay EUR 2200 for a VIP package Metallica over an evening of excellent music in Musicon. Still the crowd more or less doubled from last year, so if we keep that pace one day they get what they deserve. For us it was a cooling down over some Hertog Jan and peanuts/knakworstjes. Finally it is great to see how the 3-0 smashing of Germany this same evening also can make English football fans happy. 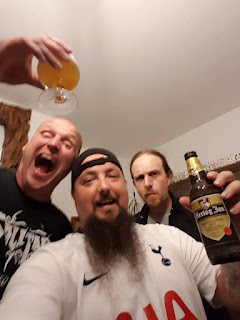