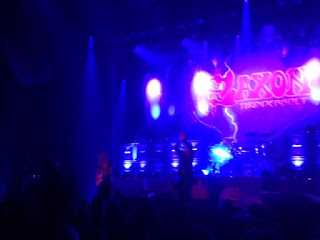 Saxon in Utrecht on a Tuesday night? Why not. Thunderbolt was a good new album and nothing beats an evening of songs from your youth to shout along with. The supports were also far from bad and given their status it was even a bit strange they played in front of a Saxon banner and pretty short too. So on a surprisingly summer day mid October I was off to Utrecht to re-live parts of my younger years. 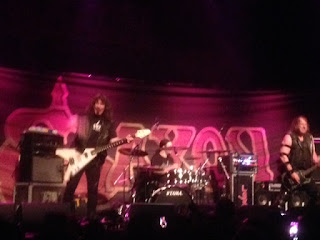 Opener Raven played Musicon only a month ago. So I knew what we would get, only not which songs remained in the set. That being only six songs was a bit weird given it was Raven, but an evening only has so many hours to fill. Starting at 19:00 hrs the hall was still filling up and the sound was not all that clear. Yet Destroy All Monsters was a good start and Raven always runs around the stage. With more meters to do so this night they must only have gotten more tired. Highlights for me in the middle Hung, Drawn & Quartered following All for One. Yet I must say that shouting along with On and On felt better in Musicon after an evening of metal, than tonight while only warming up. Still sympathy votes always go out to Raven as they just give us a good time. 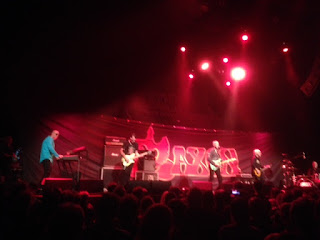 Next band FM were the lightweight of the evening. Originally Y&T would be here, but they had to pull out. Looking around the audience it seemed that many people picked up their Y&T-tee as support. On the other hand I did not see one FM T-shirt. FM do not play metal, but AOR/hard rock. For a man with an open mind and wide range of musical taste like me this was no issue, but I had the idea that many did not join me. I do have their classic album Indiscreet on LP, so seeing for me for the first time songs like I Belong to the Night or  Other Side of Midnight being played live was a treat. Actually the band seemed to be in good shape and Steve Overland remains one of the best voices in AOR. In order to get some metal credibility they mentioned themselves that a certain band called Iron Maiden covered their biggest hit That Girl. For me their second point of metal credibility was bassist Merv Goldsworthy, whom I last saw on stage 35 years ago with Diamond Head. Interesting enough they did not end their set with their biggest hit, but with a new song Killed By Love. I highly enjoyed their (also too short) set of 40 minutes and in the end several people seemed to like their set as well. 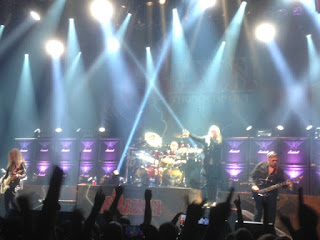 Saxon live is not all that rare nowadays, as I think they return every year to Holland. However, I can stay that for me this was their best show of the last years. The band is in great form and at the same time the audience was in good old eighties fashion. Thunderbolt is their latest album and we got I believe no less than six songs of that album. Luckily that album is rather strong and slowly in the set we moved to more and more old Classics we all know so well. Funnily enough through the set Biff joked it was too early for Wheels of Steel. Now that is a great song, but not my favorite Saxon song really. To me the highlights came in Dallas 1 PM, 747, Crusader and Princess of the Night. In reality there were no lows in the set as the new and more recent songs blended in fine. In total we got over two hours of Saxon, which might explain the short time the openers were given. Well it was right like this and I enjoyed every minute of it. Now next year Saxon exists 40 years and that shall be celebrated. Biff announced that even the Eagle shall be back, so watch your tour announcements as I shall be there again. Saxon still holds the Power and the Glory.
Posted by erikprogtricolor at 11:57