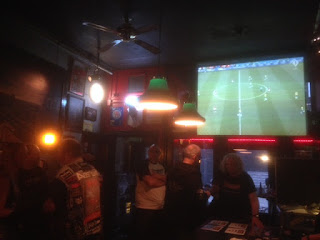 The World Cup is on and for those who like football this might impact the number of shows attended. For me so far no direct loss of gigs, but writing shall be reduced. So last Friday there was a great CD release party for Rages of Sin and Acrid with strong support of PPTA and Saturday Icarius was way too heavy for the average visitor of Vlaggetjesdag in Scheveningen and the new hering tastes good. Yet with a marathon of matches on Saturday no reviews or impressions from me in writing. Comes Sunday 17 June and Amulet would make their Dutch debut in Little Devil. At the same time Germany was losing and Brazil, a country where family and work play more than a small role for me would play in the evening. Still music over football is the rule that holds firm for now (let's see what happens when Exodus-Savage Messiah play on the evening of a semi-final). Arriving at Little Devil a big screen was on, which gave me the chance to see some 15 minutes of first and 30 minutes of second half. Enough to see that Neymar is a provoking-spaghetti headed- cry baby-twat representing all I hate in modern football. And then there was metal. 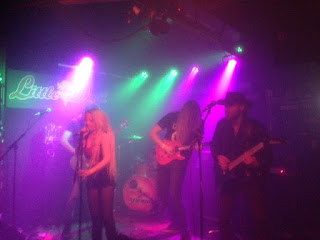 First band were from Belgum Scavenger. I must admit that in the eighties I missed them and their album Battlefields.  This band rejuvenated and now played their third show together as their female vocalist told me afterwards. This vocalist was a small girl with lots of hair. While being Belgian and speaking Dutch her inbetween song English reminded strongly of a certain Doro. It seems that Drums and one guitar are back from the original line-up and the rest is younger blood. Scavenger brought us Heavy Metal in eighties style and while old school it sounded nice to me. Songs like Battlefield, Heartbreaker or Ready were reason enough to pick up their original 1985 CD  afterwards. What a great eighties cover it holds. Nice band warming us up for Amulet and me for some 30 minutes of football as well. 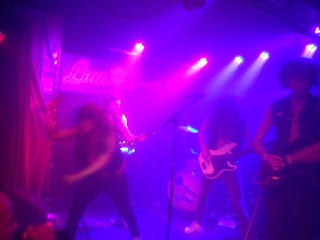 I did read of Amulet in Iron Fist Magazine first, where a review of their US west coast tour was published some issues ago. After reading the article I checked the band on the internet and found the Cut The Crap EP on Bandcamp. No physical copies on sale I could not order, but liked what I heard. Then de Nobel organized a metal CD & Vinyl fair and I did run into their debut full album The First. This album is filled with short NWOBHM style metal songs and very nice indeed. So when Mario got Amulet to play Little Devil on their way back from Der Detze Rockt festival in Germany I knew I was going to see this. After all it was father's day so I could do what I bloody well wanted. Kicking of with one guitar due to a broken string the question amongst the band was if they woud wait for second guitars kicking in. Yes was the answer and he joined on Evil Cathedral (a killer song) Hereafter the question was if he could take some time for tuning. Another yes to that and we finally went off for some 45 minutes of good old British Heavy Metal. Some new songs were included, but the bulk was build around Cut the Crap and The First. This evening was also being the last gig for vocalist Jamie Elton with the band. So the story ended with The Hangmen who would send him off. Now as a gimmick a hangman walked the stage with a noose. Suddenly I thought of their US tour review and did understand why this would get some raised eyebrows in the States. Well at the end of the song the Hangmen disappeared and Jamie was burried under a guitar and actually kicked to death by the remaining band members. A fitting end to a very nice show. As Tilburg means long train rides I decided to rush out catching an earlier train gaining on arriving home without time to thank the band. Amulet a name to watch, hope they get a good vocalist for following up the corpse of Mr. Elton.
Posted by erikprogtricolor at 10:28