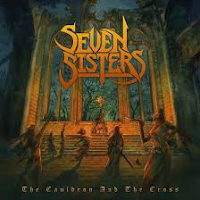 Seven Sisters - The Cauldron and the Cross
Ever heard of the Now Wave of British Heavy Metal? When living in Holland chances are big you'll answer no, as these young and promising bands are blatantly ignored in Dutch metal press. There is something cooking in the UK and many young bands play the music of the greatest musical movement ever to come out of Britain, but with a modern edge. Over the past years I saw great shows by bands like Kaine, Toledo Steel, Vice, Monument or Neverworld. Ususally building around twin guitars they give us Heavy Metal in good old fashioned style. Now The Cauldron and the Cross is the second album by Seven Sisters, but the first one I ran into. And yes it is all there again. Solid rhythm section, twin guitars the screams and clean vocals and lots of melodies. Opener The Premonition can never open a show like this as it sounds as if the fall in halfway during some blasting solo's. Adapting the start it would be a great live opener though. Basically all songs shall please any fan of Heavy Metal and this album can therefore be purchased in the blind. Highlight must be the title tracks (as there is a Pt 1 and Pt 2. In total 16 minutes of classic heavy metal packed in a song which goes from loud to soft and filled with different moods is a must hear I'd say. Good band hope to see them soon. Tip for Andrew: 16 June they play the Portland Arms with Toledo Steel. 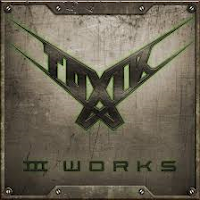 Toxik - III Works
Toxik the band that shook the world with World Circus in the eighties and then surprisingly never reached the status many much less talented bands reached. This album is a collection and at first I was in doubt. When I could see which songs would be on it after release date, I could see that purchasing was obvious. This box holds three CD's with three different vocalists. So first we get the 2014 EP In Humanity with Mark Sanders (World Circus) on vocals. I did not know that EP, so this meant 6 new songs. Then CD 2 holds the Breaking Clas$ EP. Now I bought that last year as well, but then it had three songs on it, which now turned into six. Charlie Sabin (Think This) sings on this one and memories go back to the legendary evening in Lazarus last year, where he sung for us from anywhere in the audience he could sit/stand.The box closes with CD 3 holding the voice of new vocalist Ron Iglesias. Not only does this CD contain 8 re-recorded versions of their biggest live hits, it also holds two completely new songs. So for me this CD priced box did deliver 11 new songs to start with. What can I say on the music? Toxik always played technical Thrash metal which does require some effort to get into. The breaks and wildly flying solo's are not always stuck in your head after first listen, but try again and one shall be rewarded. The eleven new songs do confirm Toxik still has it, Ron Iglesias controls the high and low and we can only hope for a return to Holland anytime soon. Finally the artwork is as always beautiful and the box holds a poster of band and fans at last year's Dynamo Metal Fest. Now I was there that day and Toxik drew me closest to the stage. Wearing a Tour de  France mountain stage cap to protect a bold head against the sun, now meant I can see myself on the poster. The Circus continues. 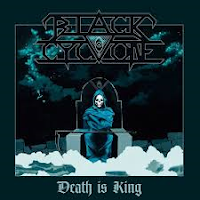 Black Cyclone - Death is King
If this album would have been released in the eighties, I would have bought it in the blind based upon the name of the vocalist alone. Now being the 21st century one goes to bandcamp or Youtube first and orders the album thereafter. The vocalist I am talkin about is Linus Johansson from one of my recent absolute favorites Trial. I saw them live earlier this year and both band and voice impressed. Now from the Heavy metal with doom and prog influences of Trial, Black Cyclone does up the speed. This album is pure speed metal as it was released some 30+ years ago. When the opening line of first song Death is Crowned as King mentions the term unstoppable force it is clear which influence is big. And indeed it is at times hard not to start shouting Masters of Metal, Agents of Steel!! Linus being one of the best Heavy Metal voices around nowadays, also dominates speed metal, with an overdose of high screams. But this band is not only about the vocals. The very fast songs all go down like an ice-cold beer on a Mayday in Holland 2018. This is total eargasm for the fans of good and old. I always thought they don't write them like these any more, but Black Cyclone jump straight to the top of the genre. Actually one recent band they remind of is Ranger, who destroyed de Nobel last year. As even the lyrics have the famous battle and conquer themes all around this band should tour. I'd say typically a band Mario puts on in Little Devil, so one can hope. If they come over, for sure they shall rule and Black Cyclone shall gain many new members for their Chaos Brigade. If you love your Heavy Metal fast with the high pitced screams, this one is obligatory.