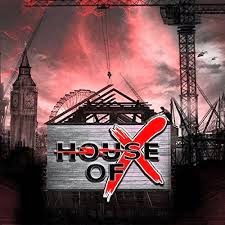 A self-titled debut album of a new band, with rather famous names in it. Until recently House of X was named X-Ufo as most band members used to be in UFO at one time or another they focussed on covering UFO songs. On vocals we have Danny Peyronal who used to be UFO's first keyboard player and backing vocalist, playing on No Heavy Petting, On Guitars Laurence Archer who played on the High Stakes and Dangerous Men album, but also knwon from his work with Stampede and Phil Lynnot's Grand Slam. On Bass Rocky Newton, who did not play UFO, but was in Lionheart and McAuley Schenker Group and finally drummer Clive Edwards who was amongst many bands in UFO as well.

With these names we get Bluesy Hard Rock which sounds very British and therefore great. This is not an album that will shock your world maybe, but it sounds very nice from start to finish. Not attempting to sound like UFO, they do include one cover, the Danny Peyronel written Martian Landscape. This holds a risk since Danny has a good voice, but not many people can get away with covering Phill Mog on vocals and come out winning. The slight upbeat version makes up partially though. Actually other ballad Alive sounds better to me. Highlight of the album I guess is uptempo party-rocker No More Tequila, which should close many future parties around.

While saying that this album might not move the earth, it definitely is highly recommended. Maybe because of Laurence Archer's presence I can hear a certain Stampede vibe in many songs as well, so just listen to this album. Meanwhile as I am on book tips as well, for ones interested in the passing of these people in UFO read the biography: High Stakes and Dangerous Men by Neil Daniels.
Posted by erikprogtricolor at 21:39