Steve Rothery - The Ghosts of Pripyat 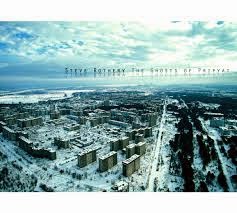 Instrumental albums from guitar heroes. Loved them since the eighties releases of Yngwie, Marty Friedman and Jason Becker. Guitarists being allowed to take the spotlights in their bands like Michael Schenker, Jasun Tipton, Gary Moore or Jim Matheos also released some great instrumental work. One of the biggest of them all though is hidden fairly well in his band, but fans know that the live shows are built around his solo highlights. This man is Steve Rothery from Marillion. Being 35 years in Marillion he now released his first solo album "The Ghosts of Pripyat" with a little help from some other greats in Prog Steve Hackett and Steven Wilson.

For those like me, who regret that the dominating role of Steve Rotherey on recent Marillion albums has been reduced a bit, this is definitely worth a listen. We go through several styles and degrees of heaviness, but the most important highlight is that this album is obviously build around the solos of one of the man that brings emotion to the next level in his guitar playing. It is always good to start the discussion if the Fish years were Marillion's creative highlight or not (of course they were although several of the Hogarth albums are also Classics one should own). My first impressions while listening to this album are memories of the first ten Marillion years. Every song used to have a Rothery solo in it for added value and he was allowed to go heavy at times as well. As on the last Marillion albums this is no longer rule of thumb, this album is the perfect adding for those Marillion fans, who want to see Rothery being the man in the spotlight. I missed his show in de Boerderij last month, but he shall open Marillion Weekend 2015 with his band for me to make up that miss. Anyone who can stand instrumental albums, should simply not miss this one as it is not about showing off, but all about emotion. Pripyat a sad town in Ukraine, now known for one of the more beautiful albums that shall be released this year.