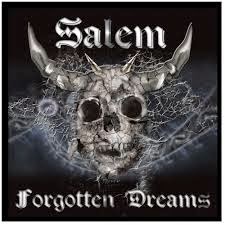 Here is one of those again: NWOBHM revival works for me as follows. First I get an anthology for the bands I did not know if released on CD. Then I try to catch them live in Holland (and miss most of them) and buy their new CD when released. Exactly the road followed with Salem. I knew the name, not the music and got their anthology "In the Beginning". Then they came for the release of this CD last year to the east of Holland and I missed them and now I bought the last CD Forgotten Dreams, to find it is a show to see later this year.

The CD opens with the Title song which blends several NWOBHM bands (vocals towards Saxon, Whooo Def Leppard in their early days, Bassing break and a melodic solo in 80's style aiming at melody and not showing off). This song sets the standard and is followed by my favorite "High Stakes". Those who expected a hair metal ballad with a title like "When Love's in Your Heart" thought wrong Uptempo hallo Saxon. A power ballad follows in "This Heart is Mine" after which midtempo "Kazakafnu" let's the head slowly bang again. "The Answer" slowly builds up to a great chorus. "Reach to Eternity" is fast and furious. "The Best is Yet to Come" is first hard to believe after Side A and B much slower and acoustic, which is nice for a change. "X-Rated" is back to mixing up and mid tempo work again. With "Break the Chains" I thought fast metal and got surprised by the slow intro and power ballad it develops into. "Ask the Lonely"is not a Journey cover, but starts with a Neal Schon like riff.
Closer "Aftershock" starts epic with a bulldozering chorus leading to an uptempo ending.

All in all a very entertaining release. I missed them last year and at Eastern in the north when Fates Warning played the same day. But they come back with Jaguar (another band I missed 3 weeks ago) in September. Being one week before Progpower in the midst of many shows I shall make an effort to be there: Great band. Finally I also saw them on the shortlist for Hatfield's Power & Glory 2 festival, but that is far away still (and the ticket for P&G 1 is bought only recently).