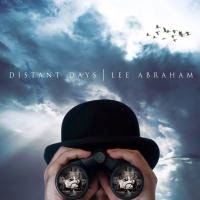 Some 4 years ago I saw Lee Abraham live at the legendary Winter's End festival in Stroud. He and his band at Black & White times were one of the main reasons for crossing the Noordzee and we arrived just in time to see the band kick off. Sean Filkins was at the time vocalist in his band and later released an album in similar vein. While Lee has a band around him, he also counts on many guests form the UK prog scene to spice things up. The same formula is applied on his new album Distant Days, which after a few spins might even be a bit better than previous release.

Opening track Closing the Door is build around Dec Burke on vocals and guitar. As I am a major fan of everything Dec Burke participates this is the liviest and best song of the album sounding close to Progmetal, also caused by Karl Groom (Threshold) adding some solo's here. Hereafter the title song comes, which is the only song where Lee sings himself. The song is a bit too slow and his voice is not that good compared with his guests, so title song or not, no highlight to me. On The Flame and later Walk Away we get John Young on vocals and after last year's great Lifesigns debut we know how good that can sound. Misguided is a welcome instrumental power intermezzo and on Epic Corridors of Power we get Marc Atkinson of Riversea fame, guiding that song. Closer and long one Tomorrow will be Yesterday has Steve Thorne singing and ends the album in style.

The album is very much impacted by the line-up of guest appearances on vocals. Since these are all known names, from bands in the same genre I can perfectly live with that variety. Having 6 vocalists on an album, always shall mean a live show complication, but this album deserves to be heard in a live setting as well. Going back to Stroud I remember the one vocalist was no impossible hurdle, so Lee get your band out and come to de Boerderij (Supporting Pendragon might gain him some fans and fit well to the bill).
Posted by erikprogtricolor at 17:10