And then there were two! The history is known, fights in the Queensryche camp and Geoff Tate continuing with a new band still calling the band Queensryche, while the rest of the band asked Todd La Torre to join them and also releasing a new album under the Queensryche monniker. By the end of this year a court shall decide who can keep the right of name, but so far we have two new albums and since released within a month from each other I decided to order them together and be the judge myself.

Queensryche has been one of my absolute favorite bands in the eighties. In 1983 they were elected EP of the year in the prestigious Aardschok annual poll and in 1984 they released the Warning and came to Holland supporting Dio during their Last in Line Tour. Those present in the Edenhal  Amsterdam shall not easily forget that night, when to me Progmetal was brought to a new level and Dio was as impressive as ever. Next album Rage for Order was another support slot. This time Bon Jovi headlined and a not yet sold out hall in Arnhem, was soon to small when Queensryche was announced to be the support band. With the release of Operation Mindcrime Queensryche reached the status they deserved and sold out 5000 people venues by themselves. They also headlined the best Aardschokdag ever, with a diverse line-up of Class acts Leatherwolf, Vengeance, Crimson Glory (more on them later) House of Lords, Flotsam and Jetsam and Queensryche headlining. Until the day of today I feel embarassed that this line up did not result in a sold out house, but maybe Queens day kept some people away. Anyway their biggest selling album Empire was still very good, but commercial traces started to enter (Jet City Woman!! which never left their live set) Promised Land was daring to be different and on hindsight their last really great album. I remember the tour when they did Ahoy on the same week/month when Dream Theater toured with their best album ever Awake. On CD DT already might have passed Queensryche, live Queensryche was still a class on its own (Mind you Fates Warning supporting DT that tour never got the same chances and cancelled a show too many in the nineties) Than it went downhill fast. I moved to Brazil for some years and saw the Hear in the Now Frontier tour in Rio. While Queensryche's back catalogue always guaranteed some highlights, the new songs were just not good enough. Later I would still buy the new albums, but even skipped Tribe due to disappointments before. Somewhere around 2005 I saw them in Paradiso (hence a smaller venue) and liked the show, although due to Geoff Tate's vocal limitations being built around too many ballads. At the 2006 Arrow Classic Rock Festival they concentrated on Operation Mindcrime 1 and 2 and I did like what I saw. The 2 album never came close to the original, but was probably the best release of the past 20 years. Dedicated to Chaos followed and well, let's not compare it with the Warning. And then I was there luckily timed by work, the historical show in Sao Paulo, where things just got ugly and the show was played under a strange atmosphere. I was actually recovering from one of the best Fates Warning shows ever with Mike Portnoy on drums, but due to the Queensryche set would pass all albums I realized that I still like Queensryche a lot, if only..    And now there are two. 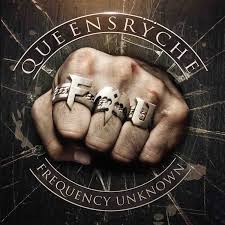 Queensryche - Frequency Unknown.
Geoff Tate gathered a long list of famous names around him, but most songs were written by Geoff Tate and Jason Slater. I did not really notice yet any impact from participations of Dave Meniketti, Rudy Sarzo, Brad Gilles, Simon Wright. The first listen then. I think Dedictaed to Chaos has been left behind, but to me the album does not sound that different from any album released between 1995-2010. The voice of Geoff Tate on album still is good, the songs are midtempo, but no melody stuck at once. I guess this album needs some more spins and maybe it gets better by time. Too early to judge fast. At the end there are 4 re-recordings of live set classics adding absolutely nothing to the original versions. Finally the artwork. Apart from the name both bands also claim the Queensryche symbol on their cover, but the fist with F.U. is hard to accept. This coming from the band once known for intelligent lyrics and thinking man's metal is disappointing to say the least. 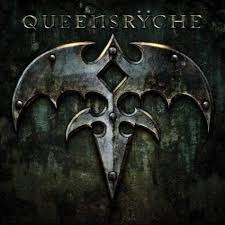 Queensryche - Queensryche
Titled similar as the EP that started it all, we hope on a new beginning here. Main question is Todd La Torre and how he would do on CD. I saw the man once live with Crimson Glory and when I remember him singing Burning Bridges, one of my all time favorite power ballads, the goose bumps still appear. So I can easily state I was not only not worried at all, but looking forward to this CD hoping for a return to glories of long time passed. Again I write this after one headphone session of both albums, but I guess my hopes were met. It took me a few minutes into X2 and Where Dreams go to Die to gain a big smile which only left my face some minutes after Open Road finished. The twin guitar melodies are back, the tempo goes up again and the screams can be long and high again. I did read comparisons with Rage for Order and Empire and can agree with this. The all time Classic level of Warning and Operation Mindcrime might not yet be reached (a certain Mr. Chris DeGarmo did not return after all) but defintely a highlight of the year, which shall be much appreciated by all long-time Queensryche fans. Only point of criticsm might be the 35 miuntes playtime, which today is not that long. As an extra we get three live versions of old songs and while not so much adding they show us how good this band can be again on stage. Can't wait to catch them on their European tour in November, supported by Savage Messiah a show to look more than little forward to.

So the verdict is easy. Queensryche should continue as the band with the new vocalist. This does not mean that I am hugely disappointed with Geoff Tate's version. On a first listen a general division can be made. Those who preferred Queensryche 1980-1995 shall vote for Todd La Torre on vocals. Those who preferred Queensryche 1996-2012 (do they exist?) shall vote for Geoff Tate. Now I do not know if in matters like these a jury comes in as well in the USA. That could be interesting getting 10 people who never heard the band and let them decide. In such case Geoff Tate still stand a chance, Otherwise I guess he should continue under his solo name and keep that band together. Meanwhile I just put on Queensryche for a second time and the smile returned.