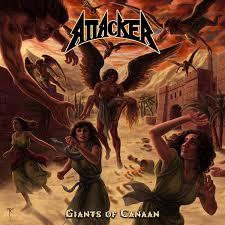 Attacker, well that's a band I long lost track of. Their debut album battle at Helm's Deep made its spins during the eighties while playing cards (Call on the Attacker!!!), but I did not even know they were still active. Then during the Deep Machine show in Tilburg I saw on a flyer from Mario that they are coming to Holland end September on their way to the Ages of Metal festival in Belgium. Internet comes to the rescue and before you know it I listened to some of their songs on the net and decided to get their new release Giants of Canaan.

US Heavy Metal they played 30 years ago and I was pleased to note that the new album, while sounding actual still has this clear US Heavy Metal style we loved back then. Think fast guitars, a hurrying rhythm section and vocals with the occassional screams that made this genre great. Anyone needing more references remember Vicious Rumors, Helstar, Metal Church, Heir Apparant  and while summing these up I realize the stream of great bands in this genre is never ending.

Giants of Canaan can stand next to the best Classic albums of the peak of the US Heavy Metal era. I even do hear traces of Queensryche (the early years) and Iron Maiden coming by. Especially closer Glen of the Ghost could have been written by Steve Harris on a good day. With the news that they are coming to Holland I decided to get the Battle as well on CD (only $8 through their site) and realize that the 80's did rule. Even the absolute classics you forget about. Anyone into US Heavy Metal should hear this album, which made me wonder if there are more similar bands still releasing great albums, completely beyond my knowledge.