Admitted I did not know them 30 years ago. Deep Machine a NWOBHM band who released only demo's at the time and also this evening did not bring any music on CD to sell. Thanks to the internet with myspace and Youtube I could see that I might like to see this band, so a train to Tilburg was an option. By the way I am in good company, since the 800 (!) page Encyclopedia of NWOBHM by Malc Macmillan also missed out on them.

Little Devil was unknown to me as well, like Mario who organizes annual several shows with heavy metal bands from mainly the eighties. Little Devil turned out to be a rock/metal bar, with easily over 25 kinds of beer and great music for warming up. At the back a door leads you to a similar sized venue with a small stage and yet another bar. Perfect location for the bands history forgot to make famous. Mario handed me a folder and I could see that amongst others this year Vicious Rumours, Girlschool, Savage and Avenger shall be playing this venue. Repeat visits lurking around the corner.

First we had Red Dragon to open. Musically OK although not shocking, but still spoiling my evening partially. Starting too late and facing sound problems with a stop of 20? minutes, made me realize that the last train home would leave before Deep Machine would end their show. Also this stop was basically passed in total silence, showing their experience on stage is somewhat rusty. Since Red Dragon is a band from the early eighties fromTilburg they brought many relatives including the next generation. This is good for atmosphere, but telling to the audience to stay for main act Deep Machine and than disappear slowly with all band and fans, lacked some respect I guess. 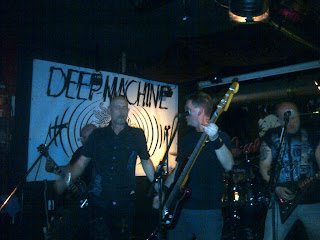 Than around 22:22 Deep Machine took the stage. Opening with a to me unknown song, the volume seemed to be pretty loud. but guitars were good and I liked the straight forward attitude of no nonsense and play hard. Then followed two songs I do know, Demon Preacher and Wit Child and recognizing songs did help to appreciate the show even more. From here we treated to me unknown territory, but the heavier edge of NWOBHM style was to my liking. I did hear the Asylum pass by, but unfortunately after some 45 minutes into the show I started looking at my phone, keeping last train in mind. I could see the setlist before me on stage showing they would play 17 songs (numbers did help, I did not count upside down) During number 11 of which I forgot the title I had to go to the station, which is very close, so I missed their Anthem Deep Machine.

Ending with not a really packed house, maybe these unknown bands do not attract audiences after all. I did highly appreciate the evening, learning about Little Devil, Mario and his good programming and it proved that British bands have a natural stage act, that Dutch bands too often seem to lack.
For those who might consider similar shows in the future and think crisis. The entrance costs 5 Euro (so the 10 Euro T-shirt was kind of obligatory, support cult bands) and an honest beer is less than 2 Euro's so, what can keep you at home?