Persian Risk - Once a King 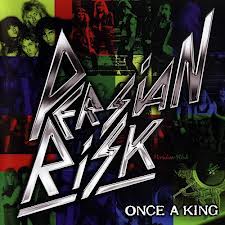 In 2012 we got the surprising return of Persian Risk a band raised in NWOBHM years, releasing their first full album only in 1986. Recently I found that I knew one song completely, being Hurt You a B-side from a 1983 single. The return of this band is not so much a surprise, since more bands of the era reformed and some great festivals for teh music are organized nowadays. The biggest surprise is the class of this release, which to me leaves new releases of the great bands of their time far behind. This is a CD you should hear at least once, if you like a mix of melodic rock and NWOBHM.

Asylum is a great opener showing that only original band member vocalist Carl Sentence is still proud owner of a powerful voice. Riding High is a re-recording and a thrill. Opening with Wheels you'd expect a Saxon like song, but the chorus does bring Iron Maiden to mind. Killer has a catchy vocal line and Once a King is the only song over 5 minutes, again already mentioned in the NWOBHM encyclopedia, so a song from the past. Soul Deceiver nicely follows the soft-hard-soft-hard pattern. Battlecry is the opposite to Riding High opening old Maiden style heading for Saxonish territories in the chorus. Spirit in My Dreams is uptempo and Dio comes to mind. Ride the Storm is a power ballad, easily carried by Carl's voice. Fist of Fury after a ballad, guess what headbanging all along. Woman and Rock is another old song, cliche lyrics ideal for the shouting along All I need is a handfull of.... Women and Rock. Wasteland closes this CD in style in mid-tempo with a catchy riff and chorus.

The band is reformed and most striking name is Don Airey on Keyboards. All members seem to be at the top of their game and this band screams for large audiences. The timing of summer festivals always conflicts with holiday plans but I note they are at Headbangers Open Air and Cambridge Rock festival, both with an interesting line-up. Keep it True already confirmed them for the 2014 (!) edition.With Lethal also confirmed, maybe worth a trip as well. I did get this CD through their website and already regret that I did not get the Carl Sentence solo CD as well. What a band
Posted by erikprogtricolor at 12:45