Three years ago I visited the Winter's End Festival in Stroud and among some expected highlights I was completely blown away by the to me unknown IO Earth. Since at the time I wrote in Dutch I can safely steal from my own words, as yesterday I saw them for the second time and the experience was very similar. 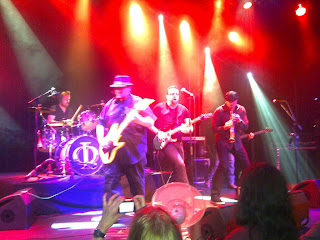 IO Earth is based around two opposite characters. The introvert Adam Gough on Keyboards, guitar and Theremin (the Sheldon instrument) and extrovert Dave Cureton on Guitars and vocals. Live this means that Dave steals the show and the rest follows him (even when ordered by a move of his head). Another differential is Luke Shingler on Flute & Alt saxophone, which sounds much nicer than it reads. Vocalist Claire Malin could not make it due to illness. Last week they even had to cancel the HRH Prog festival, but today they brought a Norwegian girl along. She also helped them out on the Yes cruise earlier this year, so respect to her. But stating she came and stole the show with an enthiusiastic performance would be too much. Her voice was good though and Live your Life Part 1 was her moment in the spotlights, which did not disappoint. 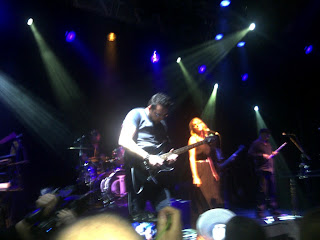 But I started to tell that IO Earth blew me away. The reason for this is that apart from their progressive landscapes Dave Cureton shreds along on all songs. Sometimes guitar hero, sometimes sensitive he is prog's answer to Yngwie Malmsteen. Luckily he has a sense of humor and not the Malmsteen attitude. This extra bite makes an IO Earth show for me among the most entertaining ones in prog land apart from the excellent musical performance. I guess they can only go up. Dave introduced some of the songs partially in Dutch. From personal experience I know this can only mean a wife or girlfriend, so chances of them being back anytime soon should be big.

For reasons not understood by me IO Earth were opening band for Panic Room and Heather Findley. Panic Room made their debut in Holland but came without their lead guitarist. This meant a lost match to me, even with Ann-Marie Helder sounding and looking better than her Norwegian counterpart the show so missed the guitar shredding fest we just got used to. I even decided to skip Heather Findley's show altogether going home with yet another great IO Earth show in my memory. Ended up getting their second CD, hope to see them after releasing CD number three for a repeat experience.