Final Conflict - Return of the Artisan 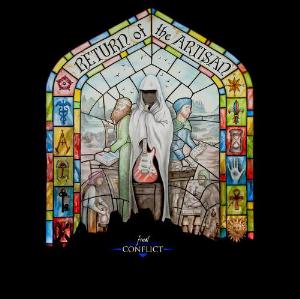 The progrock year started with this surprise to me. While getting the new Mystery (live later this year and two previous classics) and Lifesigns (great CD) I got this one more or less as an extra to myself. Hardly could I guess that after a few spins this turned out to become my hard to top Neo Prog release for 2013.

Final Conflict a band from over twenty years old, who I discovered with their collection album Simple from 2006. This was a good sounding album which got me interested and picking up two early nineties releases as well. Every now and then I play them like similar bands Credo, Grey Lady Down, Arena, Also Eden or DeeExpus. Solid Neo prog bands with great guitars.

The surprise came by the fact that this seems to be their best album clearly. After short opener the Calling we get into The Mechanic, which grows through several mechanical moods with distorted voices, into a beautiful instrumental break sounding organic with clear vocals in British accent, what was that? Probably one of the better UK prog rock songs for the last years. Passing yet another short instrumental (the not so necessary the Spark) the party goes on with Hopes and Dreams, high level maintained and the bar definitely set higher than heard before from them.  Around About next showing that Ballads, motions, power, all comes by on this varied CD with not one bad or lesser song following. Where were they hiding the past 6 years to come up with this masterwork?

Never mind the questions, this is just a great start for the year, which to me prog rock needed after some less interesting months. With Lifesigns being great and Cosmograf plus Big Big Train coming up we might be in for a great year (Alpha Flood I'm looking forward to most, but that might turn out more progmetal)

Final point of interest can be found in the drummer Henry Rogers who turns into drummers' answer to John Mitchell appearing on at least three different bands within a year (and I did see him with an instrumental trio at Mattfest which thereafter turned under the radar to me). We can only hope that his many bands do not stop Final Conflict from crossing the Noordzee later this year.
Posted by erikprogtricolor at 21:18