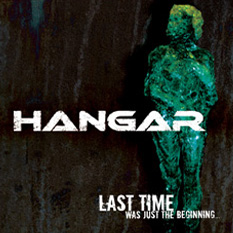 2013 so far turns out to become the year of shows I intended to see but did not. Only this week I planned but did not see Script for a Jester's Tour, Uriah Heep, Riverside/Jolly, Enslaved and Paul Gilbert. So in order to change the shape of things to come I today booked hotels near festivals I want to see. And athough they can be cancelled still, maybe these bookings get me more active. The interesting point in this is that I aimed high and the hotels are abroad. First I definitely  want to see the NWOBHM day at R-mine festival in June, so Tongeren is booked. Secondly I looked far further away. While complaining on the too many trips for work, I must admit the airmiles are good. So this summer we shall visit family and friends  in Brazil again and with limited extra costs I can travel back from Santiago do Chili. After reading about the headliner of the first ProgPower South America  being Fates Warning the goal is set (helped by Andromeda and Myrath).

So where does this CD in the category ones you should have heard come in? Well Hangar are from Brazil and they play PPSA. Usually in Rio I visit some of the specialised CD shops looking for local  prog and metal bands. Amongst several interesting tips I also picked up Hangar last year. Power Metal has always been fairly popular in Brazil and maybe because of the Italian and German decscendents around the style is similar to those countries. Good instrumental parts, Vocals with some accent and mainly uptempo. No this actually this is not one you absolutely should have heard, since plenty of similar CD's around. On the other hand it sounds nice enough all around and one song stands out. "Angel of the Stereo" is a very fast angel, with a nice shout along chorus. On my CD it is repeated in the end in a 2006 version, which is interesting given the CD is a 2008 release. While still at good songs, the instrumental closer Lost Dream does bring Gary Moore back to mind.

Hangar is defintely a good band and I got in the mood for PPSA where pretty sure some nice surprises from South America can pass. Talking of SA surpises, what happened to Thessara?