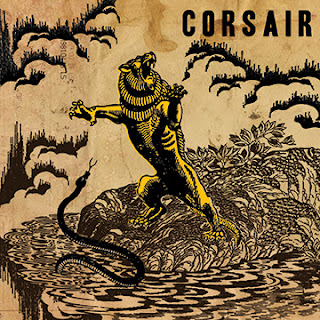 Retro bands sounding modern, yet obviously inspired by the seventies. We have seen several of them over the past years making it even to co-headliner status at summer festivals all over Europe (Wolfmother, Rival Sons, The Answer). references that are most mentioned  for these bands are Free, Cream and the obvious Led Zeppelin and Deep Purple.

In comes Corsair also digging in the seventies, with this short CD, with one major difference being inspiration number one is Thin Lizzy. This being seventies Thin Lizzy, not the Thunder and Lightning or Cold Sweat one. Listening to the twin guitars and especially the voice of bass player Jordan Brunk and you can almost feel the Black Rose of the Emerald. Unfortunately the vocals are shared between three members and the other six songs are not as spot on back in time.

This does not mean that there are only two good songs on this CD. Due to the voice of Paul Sebring his three songs have some NWOBHM feeling over them and frequent readers of this blog do understand that I do not have the least of a problem with that. Only remark could be that some uptempo would be welcome, since in general we hear midtempo work. Since the main ingredient is twin guitar sounds this is still a good listen. Second guitarist who also sings is Marie Landragin. The fact that she is a woman does not impact the twin guitars, but does make the final song a bit different from the rest (This Mortal Coil vocals over a Cave In/Anekdoten song)

Corsair obviously like their mix of vocals and instrumentals, but to me Jordan Brunk can be promoted to the only vocalist. Yet another band that to me might be just as big as the above mentioned examples. Let's see if luck strikes them and someone influential picks them up and puts them on the right festivals. Very nice CD indeed.