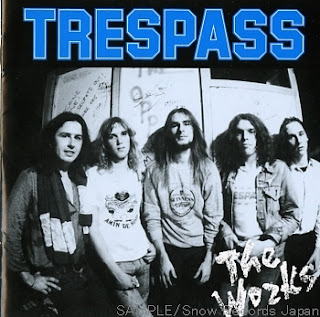 Still there in the early eighties. With the reduced stream of interesting new CD's I have been surfing, finding and buying lately quite a bit of metal history.  Guided by the book Suzie smiled the NWOBHM and internet sites for viewing or listening I did fill up some gaps in my ncollection. Most interesting is the number of songs I did recognize or could actually sing along, without knowing I knew that band and song. Biggest surpise was learning that the old DPRP Radio/Stroud FM tune came from Demon's The Plague.

Next to the recently described Shiva album (which I definitely did not know 30 years ago) I enjoyed a lot re-listening albums of Praying Mantis, Angel Witch and my favorite new old NWOBHM album Trespass - The Works. The opening song is their Classic "One of these Days". Apart from their other single "Bright Lights" the song that came back to memory immediately. The Works is a collection of 16 songs and I must say all are very good. Some factors are a constant: Songs are all about the song, Lyrics are short and often repeated and guitar solo's are plenty. The range goes from mostly mid-tempo NWOBHM to some faster songs (Stormchild) and ballads( Point of no Return). I actually was after their anthology which is a double CD with all recordings, but could not find that one. After listening to The Works almost constantly over the past weeks I am now searching for The Works II, which should complete my Trespass collection.. I always considered Stampede my favorite NWOBHM -era band, but Trespass are as good.

Mentioning the internet, it is surprising how little there can be found on this band. Hardly any reviews, no own website, and some sky high priced singles on E-bay. This makes you think that they no longer exist, until the line-up of Headbangers Open Air suddenly includes them. When scrolling the web I do read there is a NWOBHM revival going on. This is very welcome indeed, with albums like these showing why metal and hardrock boomed 1979-1983.

Last tip on NWOBHM live (although unfortunately without Trespass): The new 3-day Belgian R-Mine Metal Fest, shall have on the last day a NWOBHM program with Hell, Tygers of Pan Tang, Savage, Demon and Cloven Hoof. Still waiting for headliners on the more Power metal day, but this seems to become a history leason I would not like to miss.