DMJGH 22: Disillusion - Back to the Times of Splendour 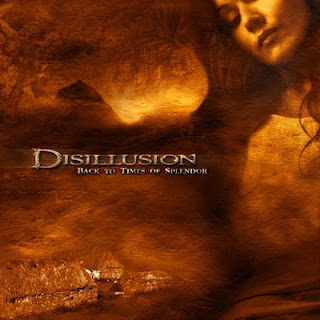 Over the years I have discoverd many great bands during Progpower (and Headway) On the other hand, since worktrips made me miss quite some days at the same festival. One of the bands I would have loved to see performing an album live would be the above mentioned band and CD.

Like many of my favorite albums this one is hard to classify. They are many times called progressive Death metal, but there is so much more to them. You can hardly call the Tool-like vocals and heavy bass death metal. At the same time grunting is a minority on the vocal front. Several effects are popping up through the CD hinting already to their very different second album (Gloria), but these six songs ranging from almost 5 to 17 minutes just cross too many boundaries to describe. At the time of purchasing in 2004 I considered this to be an alternative for Opeths epic works. Now I actually hear this is even more challenging. Their second album Gloria was made up of much shorter songs, with some industrial sounds distracted me a bit from playing this classic release frequently. Those not patiently enough to listen to a full album (hallo IPod generation) should at least listen to the 14 minute title song, a violin, a semi grunt, a beautiful melody, very uptempo and full of breaks, some distorted vocals, a catchy chorus, some great riffing, an acoustical intermezzo slowly getting louder, a solo and not one boring second during these 14 minutes.

Resuming: Everyone with a minor interest in heavy music should give this album a chance. Surfing the internet I did not see any recent updates on them playing shows, but with today's music scene making it impossible for all smaller bands to live by music this should not mean they shall not reaapear and surprise me. With the current trend from bands playing classic albums from start to finish I have a candidate on my wish-list.
Posted by erikprogtricolor at 22:31