Heretic - A Time Of Crisis 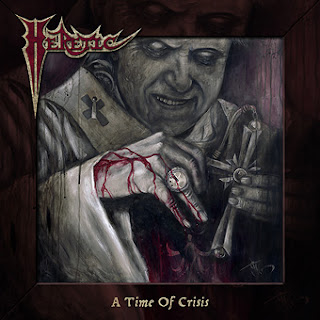 American Heavy Metal. It came some years after the NWOBHM and brought us some great music as well. One of the bands I got on LP at the time was Heretic. Later known when vocalist Mike Howe moved to Metal Church (And closed the Dynamo Open Air 91 festival with an extremely enjoyable show) But Heretic's Breaking Point also was a great album, so when I ran into yet another comeback and saw they released a new album in 2012 an order was placed swift.

It is interesting to see how several music forms stand the test of time so well. Early 70's prog rock, early 80's NWOBHM might sound dated in a way, but at the same time still very good and the quality remain. American Metal was the more Power/Speed driven direction when already faster subgenres were developing and Thrash Metal was even bigger at the time.

This album in general moves on heavy mid tempo speed and is full of guitar solo's as we love and which were not mandatory within some later arriving subgenres. The album touches political views, bangs along nice and holds some traditional hymns like Raise Your Fist. Main difference with their debut album is that vocalist Mike Howe is no longer around and Julian Mendez takes the honors. Unfortunately I have to conclude that Mike Howe in his eighties form would have lifted this album up a notch. JM is not necessarily bad, but he lacks somewhat on the power front. I always liked the high pitched screams which many US metal bands had plenty off, they are absent here. The Scream during their band anthem Heretic is there, but still not deafening enough. By the way this remains probably their best song, fast and furious.

Now I am looking for nostalgic metal festivals on a pleasant scale I do know this band along many great 80's bands shall be at the Headbangers Open Air festival this July. I feel I need to go and this CD only got me more interested since I don't want to turn my back, on the Heretic!
Posted by erikprogtricolor at 10:02