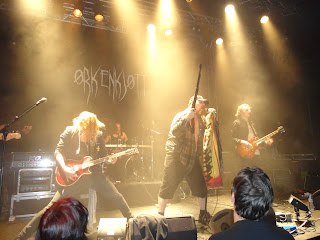 Thank you ALL, shouted the vocalist of Orkenkjott after the first song, with a cynical undertone looking at the about 30 people who actually witnessed the band opening this evening. Later on it got slightly better, but what is going on here?? 4 bands all exploring their own boundaries, loads of beards on stage and hardly anyone bothered to pay less than 20 Euros to check them out? Well Orkenkjott turned out to be not impressed by any lack of audience and were just as lively as three weeks earlier on Progpower. Problem for me was that than I was already not overly impressed and now the element of surprise also left. So I saw pretty much a shortened set from 3 weeks ago and still the songs did not stick in my head. While being in doubt before, now realized that I do not need to check out their CD. By saying that their shows probably shall always remain entertaining and closer "all the way from Texas" was again a nice change in act, so pictured here above. 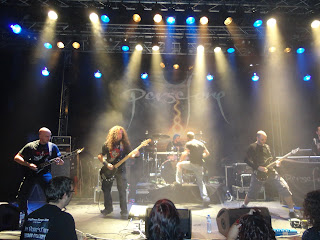 Andorra is a place most people know little about I guess. Apart from the occassional pointless football match or Tour de France stage they never appear in the news. Now we know they have at least one sympathetic metal band. Pretty much liked their show and music with enough energy and variation to entertain for the time they had. What made me not run and buy their CD afterwards was their vocalist. A tiny man with long beard and a powerfull metalcore scream. I would have preferred a grunt/clear vocals mix for their music. The clear voice now came sporadic from the keyboardist who spend the show with a smile on his face looking into the audience. When after a few songs our small vocalist decided to take of his shirt to show us his branded underpants, his angry expresssions became somewhat laughable. Or quoting Prog magazine: this was not a very prog thing to do. The music itself sounded good enough and headbanging was definitely an option. 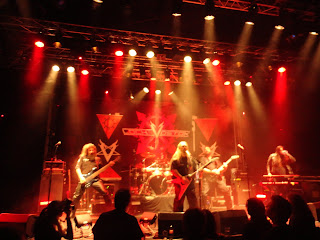 Loch Vostok came next on. I actually have two of their CD's and saw them once before at the Headway festival. What I remembered from that show was the vocalist asking for audience participation on the differences between a Death Metal grunt, a Heavy Metal shout and a Black Metal Scream.  After two songs it became clear to me why I only remembered that. While the instruments, vocals and grunts all sound very well the songs just failed to make an impression. They passed by and moved on to the next one, without any effect on me. As the pygmee (his words) vocalist announced the last two songs to be much better than the crap they played before he was partially right. Defintely suddenly some recognition during the songs happened. So yet another nice enough to see band, but no need for closely following their future steps. 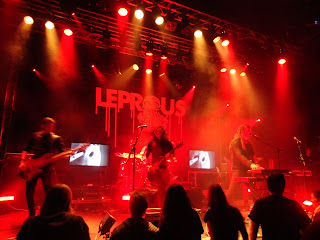 And then came Leprous a band not yet big enough to head such a tour, given the around 80 people I guessed being present during their show. This is pretty strange looking at their very good Bilateral CD released last year and their succesfull performance during Progpower 2010. Leprous are a lively bunch on stage who like to add show to their very groovy progmetal. Given their lively performance I did not see the need for the arty-farty movies shown on the two television screens. But going to their performance we could see a band in top form. Alll instruments were coming out nicely and even while the vocalist seemed to be suffering from a cold his vocals were great from loud an aggressive to subtle and beautifull. Leprous play intense music, that makes you want to move along just the neck or full body dance along. This is a band that should become big in our scene, since songs, performance and attitude are in place. Just wondering if 4 albums down the road they still stick to the red and black suits and ties.