Marillion - Sounds that can't be Made 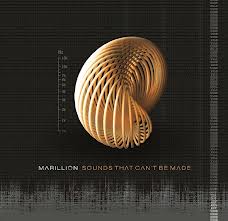 Today Marillion play in Rio. On more than one occassion they made it clear in interviews and during Marillion weekends, that Rio is probably their favorite place to play. And while the last week re-elected mayor of Rio called Seedorf the most Carioca of all the Dutch I dare to put that statement into question. While maybe not the most Carioca, being a head taller I am at least the more Carioca. In 1998 I came close, but after just meeting Josy we travelled to the North East for a long weekend when they conquered Rio. A great bonus of Rio shows is that due to history they can and shall not ignore the Fish past completely, so at least Kayleigh plus some surprises can be expected. Now that 2012 goes missing as well, I know where, how, why and with whom I shall be next time they play the fantastic place.

But that is Marillion live, never disappointing. Here I am writing about their last album. Weeks after appearing in the shops by a joined effort of British and Dutch mail also their special edition arrived at my home. I still buy their special editions in the blind and all because of past performances and never disappointing live shows. The last two albums "Somewher Else" and "Happiness is the Road" did not impress me much and because of their large back-catalogue shall have a hard time being played again soon. The band turns too much into a H solo project for my taste and Rock and Roll is no part of Marillion anymore. The late arrival of my copy gave me the chance to read several reviews in advance and expectations went up, since the general view is positive.

Gaza starts of in a different way indeed. The guitars from Steve R. (God to fans) is heavier than normal and almost agreessive at places. Since the Papers Lie, I have no opinion on Gaza. I believe the statement that there is no intention to take sides or insult anyone unnecessary. Marillion's intentions are to make the world a better place in general and if people get insulted I tend to think it is their problem. But drifting off the music, a great song and probably live an opener to get everybody ready to rock.

Problem for being ready to rock is that if they follow the CD. Sounds that Can't be Made, Pour my Love and Power put you back in your chair fighting against the sleep , well almost. Of course the solo's from Mr. Rothary are above average and the music is Quality, but I can not stop thinking that it could have been better and mainly louder.

And then comes Montreal. For me the best song although not really structured or built up. Many bits and pieces telling about their weekend experience in Montreal we go through the motions. The lyrics are just telling the trip, flight, receipt, day program, fans, but when H sings about jet-lagged people a piece of beautifull music brings us back to Brave atmospheres. Next year shall be the first Marillion -weekend since 2002 that I shall not attend, but listening to this song puts the Montreal weekend on the maybe list (although competing with Y-prog. HRH prog, Celebr8 in the UK unlikely to happen)

Invisible Ink follows somewhat under the radar for me (H-solo song), but Lucky man is much to my liking, with the very catchy chorus which makes you sing along (if agreeing to the lyrics) "I truly am, A lucky man, I have Everything that I want". Pleased to hear also that there is somewhat power in a song appearing, And ending with yet another ballad, but this time spot on for me. The Sky Above the Rain has beautifull lyrics on a relationship that is over but not ended, the build up brings us an emotional ending of the CD, helped of course by some magical guitar work.

After some 4-5 listens Marillion CD's tend to be hard to judge, but as a first impression has been made. Probably somewhat better than the two previous albums I do not think it reaches the level of my favorite H era albums, Brave, This Strange Engine and Anoraknophobia. (I managed almost not to mention my favorite Marillion albums that is 4 times Fish on vocals)

Still I wish I was in Rio this weekend seeing Marillion in the Vivo Hall on Saturday and Fluminense  (lider isolado) on Sunday in Enghenhao. Maybe next time and I shall be a lucky man...
Posted by erikprogtricolor at 10:48