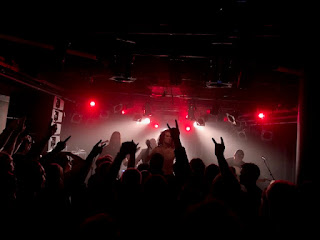 Last week I attended the start of the Toxik/Thorium tour in Lazarus. After that show I wondered if going to see them again would make any sense as the atmosphere in Lazarus would be unbeatable. Well Hans could not join Sunday, so I was more than pleased to join him to Dynamo. Now seeing the same sets on a proper stage, even if it was the basement. 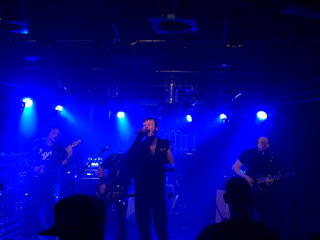 Thorium kicked off at eight and now knowing their debut album I recognized more songs. It seems a right choice to close the set with Ostrogoth and Godspeed two of their fastest bangers. Being relatively unknown means that a cover might get more reaction. I can say that Dynamo was more open to their Heavy Metal than Lazarus was, but most reactions did come back at them when they gave us the Hall of the Mountain King. A fine band they are and doing just what is needed to warm us up. 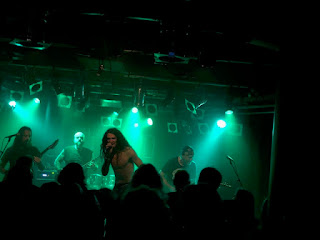 Toxik touring Think This. Seeing the songs live on stage, except the Led Zep cover only reminds us how good that album is. Bookended and halfway broken by some eight songs of World Circus this was one trip down memory lane for the mainly older audience. I remember how during the last tour when tuning took long for someone Josh spontaneous (!) told us how good it was to see the old, bold and gray people still hanging on and doing what we love with a passion that obviously is here to stay. Well Toxik tonight did what we came for presenting their technical thrash metal classics in great form. The band is tight and hired hand Erik on guitars gives the band an extra base during solo's. Last week the show ended in a party with Dennis' birthday and War Pigs. This evening held again a surprising end. When all seemed over suddenly Thorium joined the band on stage and we got two covers. The first one sung by someone of the audience again, while my preference went out to Queensryche's Lying Needle. What a way to end an evening of top class metal in Dynamo. The choice of going again paid of nicely. The only disadvantage was that we had to have a certain rush towards the station to catch our last train, so proper thank you's to the bands could not be given. 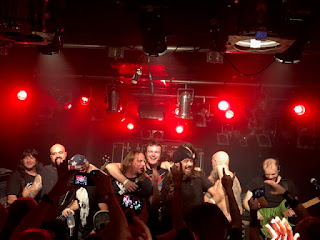 And then it was up to the trains. When all in life is shining at you, misery is around the corner and vice-versa. This evening the NS (national rail) took care of that. Our last direct train home was cancelled. So I explained to NS jersey wearing assistants that according to their regulations, they should give us a taxi home. Well they go out of their way to make sure that this won't happen. A long list of people and poles talking to us either lying or just plain incompetent. This made us run in Rotterdam for a connection which any disabled, injured or handicapped person would never make. The evening ended in style when after many misinformations finally the man at the ticket desk  at the wrong station in The Hague managed to get me a taxi to Central Station, where I needed to get my bicycle out before closing time. When he stated that in 25 minutes my taxi would arrive (while there was a queue of them in front of us), I could only laugh. The lady hidden inside the information pole in Eindhoven told me I could walk from one station to the other in 5 minutes obviously must be Usain Bolt's bloody sister as normal humans do take considerably longer. In the end I got my bicycle out just in time and when I was close to home I was called by a taxi-driver informing me he had arrived to pick me up (32 minutes after being ordered). With all the annoyances at the end it still was a magical evening. So thank you Toxik for the music. Given the intelligent nature of Toxik lyrics on social wrongdoings, I suggest them to train around in Holland a bit and write about our NS for their next album. Until then I think I give Think This a few more spins.
Posted by erikprogtricolor at 11:31