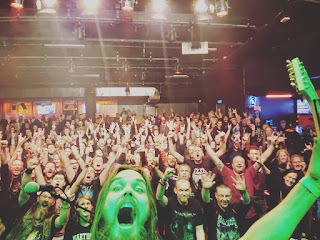 2019 was another great year for live gigs. As it seems today I already saw my last show of the year last weekend, so time to make up some lists. Now that I am spending more time in Portugal I did miss several shows I would have loved seeing, but I do not schedule Portugal visits based upon concerts (PPE excepted maybe) Still I managed to see many great bands and could include Belgian, German and Portuguese shows on my list. Unfortunately our UK trip got cancelled due to Biff's operation. One process seems to be continuing and that is that I move more away from progressive rock in favor of more extreme metal. A second trend remains that with live shows I appreciate nostalgia, while at CD's I prefer new discoveries as much. For some years now bands take selfies with the audience trying to get me good on the picture. The band best succeeding this year was above's In Mourning gig at Brainstorm. Capturing well how I felt about gig year 2019 loud and emotional. So let the countdown to my favorite show of 2019 begin.

19. Vicious Rumors - Nobel Leiden 18/4
An evening of US Metal with Digital Dictator being played in full and not much can go wrong really. And so it was one fine evening in Nobel, before they became Digital Dictators themselves #hatecashlessvenues..

18. UFO - Boerderij Zoetermeer 11/6
This tour is called last order's and who doesn't want to see Strangers in the Night on final time? Musically UFO are among my all time favorites. During the show UFO failed to say anything on a last Dutch concert and a new show is already announced for 2020. They also did not mention the passing away of Paul Raymond only weeks before, which was weird. Performances still top though.

17. Exhorder - Musicn The Hague 13/7
I misssed Exhorder completely in the past. This evening turned out to be a huge surprise in Musicon due to both the surprisingly good music and the very full Musicon. Hope to see them again next year, when I will pick up their new CD, not yet released that evening.

16. Last in Line - 013 Tilburg 14/12
We knew from two years ago they are a great live band and do justice to Dio's legacy without aiming at copying his voice. What a pleasant trip down memory lane back to the eighties it was and their new songs standing firmly inbetween.

15. Marillion - Aula Magna Lisboa 31/5
Marillion are among my all time favorites and of course the Fish years were best. This was another Marillion weekend and overall by far their worst with a horribly setlist on Sunday. The Friday opened well with the Hogarth early years and I won't mention the disastrous venue having no beers on a hot evening.

13. Armored Saint - Iduna Drachten 14/7
We could not make it to Dynamo so Magchiel and I went to see the two best bands a week earlier in Drachten. Last year the Saint made it to number 1 on my live shows. Now as good, but even with new old songs blended in not as surprising. Yet still very good and Metal Church were pretty OK as well.

12. Jag Panzer - Musicon The Hague 22/5
Another band from the eighties that is not passing by that often in Holland. One fine evening of good old US Metal with a band in form and too few people in. The Tyrant having a cold still sounded pretty strong on vocals as well.

11. Flotsam and Jetsam - Baroeg Rotterdam 2/8
Earlier in the year we saw them blowing Destruction and Overkill off the stage (in my view that is) Headlining in Rotterdam they were just brlliant. Both old and new songs sounding as strong and with a warming up by Helstar one fine warm summer evening it was.

10. Witherfall - Patronaat Haarlem 20/3
An acoustic set making it to my top ten shows how good this band is. Wonderfull calm version of their Heavy Metal songs made us long for a full on amplified set. Great band who did show that two strong CD's came not out of the blue.

9. Satan - Little Devil Tilburg 15/2
Want to have a band from the eighties blowing you away go and see Satan. What a strong performance they gave us and they can get away with putting the focus on new songs. Warmed up by Screamer and RAM this evening showed us old school heavy metal and nwobhm is still very much alive.

8. Psychotic Waltz - Sjiwa Baarlo 5/10
Yes I know Devon Graves was ill and his performance put off most of the audience. Yet I saw him perform and giving it all with a band showing why they were the best live band in the nineties. A new album coming with hopefully a new tour. Time to show they can be brilliant again.

7. Green Carnation - Effenaar Eindhoven 23/3
Prognosis a new festival with start-up issues. I only saw the Saturday as more challenging on the line-up.  I did go to see among others Green Carnation, but did not expect them to be this good. Turned out I knew all their songs and many agreed them to be winner of the day/weekend.

6. Angel - Manege Fonck Liege 25/8
The award for I was not expecting to see them ever on stage goes out to Angel. Being a fan for almost 40 years I loved the set. Even if they played short and did not mention their new album we got the best of Live Without a Net and I saw the Tower live. Heavy Pettin'and Dee Snider were as good on the day so a festival to return to.

5. Azusa - Merleyn Nijmegen 13/8
My Pedal to the Metal bicycle round trip ended in a high with this band. I loved their CD, but live they were a blast. Weird extreme prog metal with female vocals that went from nice and clear to scary and screamy. Performance to match the chaos this is one band to follow closely.

4. Swallow the Sun - Rockpalast Bochum 26/4
Releasing one of the highlights of the year on CD and then performing such a strong set made it more than worthwhile driving into Germany, even without anyone bothered to join. Later in the year I saw them again at Dutch Doom Days as strong, but Germany held Oceans of Slumber as support so a double hit it was. Great venue as well with a metal cellar after party.

3. In Mourning - Gigant Apeldoorn 9/11
At least on stage In Mourning now catapulted to becoming my favorite Tech Death Band. These songs are all about the atmospheres being build by three guitars and they are so enthusiastic on stage it is contagious to audiences. I can say plural as a few weeks before I also saw them as strong in Baroeg, playing one song less though. Colossus of a band!!

2. Toxik - Lazarus Leiden 24/11
When such a great band now on three consequetive European tours decides to play Lazarus things only can turn epic. I believe the current line-up was even stronger with extra Dutch guitars and Ron Iglesias on vocals having no problems with the screams and power. Lazarus was the absolute party experience, while Dynamo a week later gave a proper tech thrash band on stage. 30 years Think This and hoping for many more years Toxik.

1. Heir Apparent - Musicon The Hague 10/6
Is it cheating when you put your own party on 1? I can't care as Heir Apparent were the best band I saw this year on stage. The doubters who did not get 2018 album The View From Below did see that both old and new Heir Apparent rules. One of the major injustices in music, why this band is not headlining stadiums. I heard only positive feedbacks the days hereafter, both on band and vocals. Unfortunately Will Shaw meanwhile left the band. (last year my favorite new vocalist Linus Johansson left Trial after I loved their show, so hope this does not become a trend) I do not know if we can see Heir Apparent back in Europe any day soon, but I do know I saw an absolutely amazing band. So thank you Heir Apparent for making the big effort to come and play for us. Unfortunately I missed their Little Devil gig due to holidays, but I learned it was as good. The ones not showing up missed out big time. Tear Down The Walls!!! 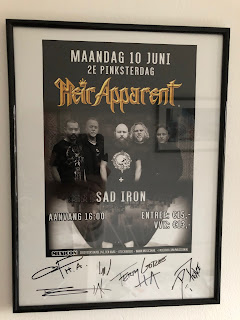