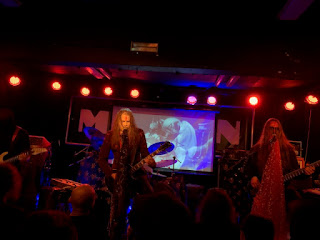 This package was originally scheduled to play Gebr. de Nobel but was canelled and later saved by Musicon. For me this meant no dinner with Tiago before the show in Leiden, but considerably closer to home. So even though I knew nothing of all four bands apart from names it was down to Musicon and let them surprise me. Like minded thinking Marco was already in when I arrived and a beer was waiting for matters to start. Being a last minute announcement on a Tuesday in overfull gig month November I thought the turnout was pretty decent. 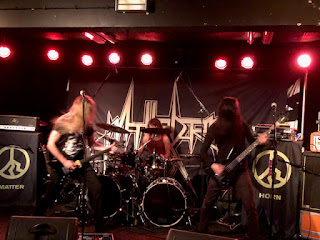 Matterhorn are like the mountain from Switzerland. They had just started when I entered and they played pretty good. Marco was reminded a bit of Celtic Frost and the trio was powerful indeed. I liked them best when they went instrumental, but overall a surprising nice opener. 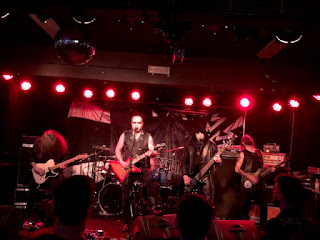 Next band Blaze of Perdition was coming on stage in painted faces, so I expected traditional Black Metal. During the first song I could not really place them, but slowly they grew on me. The mix of two vocalists, both going harsh and gothic worked well with lots of echo. Holding three guitars meant that the wall of sound was not showing any holes really. Their last song was a cover by Fields of Nephilm (thanks Arno) just to show they were blending goth with black. Interesting band number two it was. 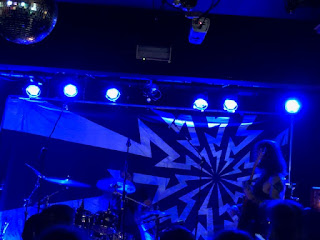 The stage became all black and white flashy for next band Bölzer. This band is actually a duo consisting of drums and eight string guitars. How the hell they managed to keep this heavy massive sound going was really the question that would not leave my head. Impressively done by the two swiss men who managed to keep heavy atmospheres waving through Musicon. To me after some 40 minutes it lacked a bit of variation, but that was also caused by the fact that I did not know them at all on forehand. To many they were the band of the day, as they got by far the most reaction from the crowd. 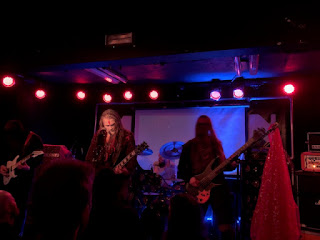 And then up to DHG/Dodheimsgard to close the evening for us. Before going to Musicon I had checked bits of this band out on the internet and the least you can say is that this is no easy listening combo. For several people this complexity was a signal to go home also helped by last trams and early Wednesday mornings. Well I can say that the leavers lost. To me this became the most interesting band of the evening. Helped by arty-farty images on a screen behind the drummer this painted band took us on a rollercoaster ride. Interesting guitar solos by the man hidden in black (including his face) piano intermezzo's by teh man in red/black, Gene Simmons tongue showings by the vocalist in white face, very heavy hitting drums, there was tooo much going on to grasp fully. While also here I did not recognize any of the songs helping me to absorn them better I stayed hooked and when already late the band asked if they could play more and their own soundman indicated it was time to stop I actually could have more. Through the set they moved slowly from avant garde to more traditional Black Metal and those who stayed probably saw their favorite band of the evening as well. So we can thank Musicon for stepping in and safe this package for the Tuesday evening in Holland. Next week they are in Eindhoven and if you are open-minded you will enjoy yourself with these four bands.
Posted by erikprogtricolor at 10:31