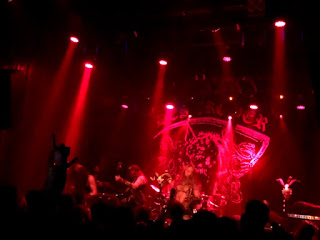 This package is called Sons of Rebellion Tour and are tonight together with the Mayhem & Gaahl's Wyrd tour also playing in Nijmegen. The latter half being back in de Nobel on Friday. Complicated? not really just go and let yourself be surprised. Yesterday I posted that with Tiago living in Leiden I might be tempted to see any show that might be of interest in town, so I can have dinner with hime before. Well this evening I stepped in the dark as I did not know any of the bands other than by name. Playing in the small hall I was afraid for an empty house upon arrival, but that hall filled up in the evening. Also by the obligatory demolition of the smoking area inside, the small hall gained on capacity. Yes in Holland we are no longer allowed to think for ourselves, so we should be protected from anything that might harm. I am afraid I will still live the day when alcohol is banned from venues as well. 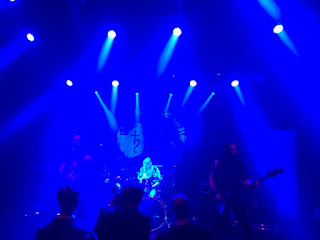 But this evening with first frost at night hitting the country was meant for some dark music. Upon the stage from Manchester England were Inconsessus Lux Lucis. They turned out to play some Black metal mostly linked to the very old school. At first I needed to get into this with nothing polished in their sound. Then the penny dropped I started liking them better and better. There was a certain NWOBHM vibe in their songs as well, with lots of long solo's over the bass and drum parts and galloping riffs at times.. This trio did win me over and I did get their CD, which sounds as dirty. Nice start. 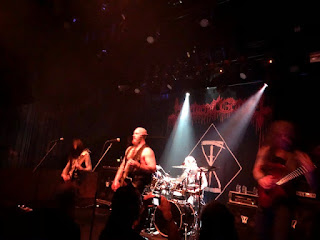 Next band came along all the way from Australia Nocturnal Graves. Mixing up some extreme genres you heard black, thrash and Death metal. Their total sound was a bit cleaner than the openers. Interesting enough I had the same feeling again after the first song, not sure if this was for me. Than by sticking around I started liking them more and more and here the two guitars especially with very clean solo's over the brutal metal were winning the evening. They travelled from far, but made it worthwhile and went down very well with the audience. 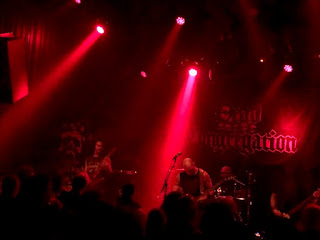 Dead Congregation are from Greece, so I wondered why Ronald and Lia were not in.They play Death Metal at times of the ridiculously fast kind. This band knows how to blow you out of your socks. For the 45 minutes or so the speed could not be all the time at 200%, so at times Doom bridges were build in. This made up the necessary rest and variation, before they would crush on again. One interesting experience, but maybe not on CD for me. 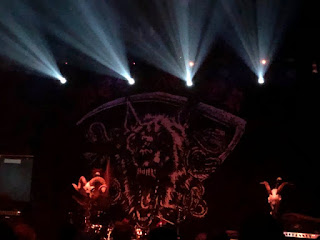 Destroyer 666 are originally Australian, but based in Europe. As they spend some time in Holland we were welcomed by: goedenavond you lelijke motherfokkers. Being headliner was quickly justified, as Destroyer 666 is a powerhouse. Not as extreme as their supports we got metal. At times I heard Motorhead, than mixing with thrahs and heavy metal. The bassist even gave us metal screams at times. When the second guitarist was taking lead vovcals wet entered death metal areas. It seemed they even had a hit in I Am the Wargod, as this was received very enthusiastically. This metal show fullfilled all I need to see, still I bowed out before the end catching a train. Standing on my feet a full evening and deciding to go calm on beers was not a combination that made me jump. So tired I passed the merch stand one last time picking up an EP. One final comment on Nobel on that. It is all nice to decide going all cashless as a venue, but bands selling merch need cash. So there is no change in the house, which to me seems poor service towards bands. Still I trained home pleasantly surprised by four good shows. Friday I can't make it for part two though.
Posted by erikprogtricolor at 10:23