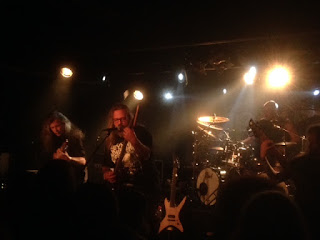 Four headliners touring Europe bringing one support. This being on a Wednesday in the midst of Festival Season, no trains running between The Hague and Rotterdam and Baroeg having their limited opening hours. Yet de Baroeg filled up well as the reputation of these four different bands all attracted their own fans.  I was personally most looking forward to Revocation, while I also own and appreciate last albums by Havok and Fallujah. Gorguts would close the evening tonight, but were unknown to me. Openers were young Welsh band Venom Prison. Starting at 18:00 on a weekday is always a challenge, so slowly people came in throughout their set. They also were the only band not allowed to use the bigger drumkit at the back, reducing the space on stage for the five of them dramatically. This was especially a pity as their wild moving female vocalist would deserve more than the two square meters she had available now. Musically OK, their songs did not really stick in my head at first listen. Still they warmed us up well enough for the four headliners and this was good as tonight Revocation would be the first in line. 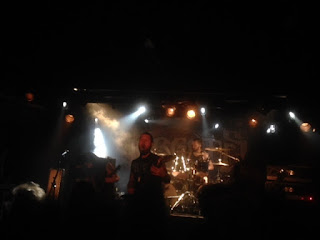 Last year I saw Revocation in Patronaat and even following up the mighty Beyond Creation they knew how to impress the audience. Well tonight it was even much better. Being Baroeg one is close to the stage always and their dual assaults came over us with power. Dual assaults refer to the guitar parts and the vocals. It all seemed so easy on stage, while listening closer the riffs, breaks and solo's are just amazing. They played several songs from recent album Great is our Sin and from Headless I remember Scorched Earth Policy. Did not really matter what they played, only problem was that with this full evening their set was limited to 40 minutes only. From what I heard afterwards they won over many new fans. Now let's see if they can come back headlining giving us a one hour set next time. Band of the day to me and by the reactions during the evening I was not the only one. For Fallujah the hard task to follow this up. Well they managed OK doing so. Their musical style is different going to Deathcore territories. This being supported by one amazingly tight band. I thought I recognized some songs or parts of them, but this show held two problems to me. First the sound was not as clean as needed for such a technical band. Second the vocalist was a tat too monotonous in my ears, where again the sound did not help a lot. Still I enjoyed myself big time by just watching guitars and bass dancing around the necks with ease and giving us one impressive base. Definitely going to see them again if back in Holland, but hoping for a better sound. 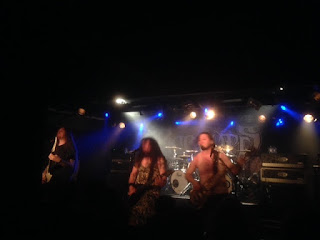 After another nice break on the terrace this pleasant summer evening, one needed to go back in time to see Havok. This band plays thrash metal. Earlier this year they headlined a mainly thash metal package in 013, tonight they were the one waving the thrash flag with pride and how well they did. Vocalist/guitarist David Sanchez decided to play in a dress tonight for visual effetcs, while many attention again did go to bassist Nick Schendzielos. Without ignoring the rest of the band, what an animal on bass this is. At the end the green lights came out of his bass again and he must have lost some four kilo's sweat in 40 minutes. Again a show that could have gone on so much longer for me. And also again much better than last time as I was now closer to the stage feeling the thrash. They also managed to create the largest pit of the night as it was at it's peak of fullnes now. Many highlights this set held, but one special mention for Hang 'Em High. The line "the enemy is not coming from overseas" never looked as apt as these days. Topshow by a great band. I said it before this year, missing the big four (on purpose) live is no issue, with so many great thrash bands touring and releasing better albums than said big four. Closer of the evening were Gorguts. While they exist almost 30 years I managed to know nothing of their work. This gave the opportunity to enter the show in the blank and see what was comming. Well a bulldozer was coming over us. What a heavy band this was. Technical in their grooves, but the word that stuck was heavy. A good band, while I did not get their album as the vocals were a bit onesided to me. Staying with the vocalist he was a remarkable gentleman. No swearing, fucks or whatever, but thanking us for the wonderfull evening of metal we had. I thought his presentation quite refreshing in that sense. 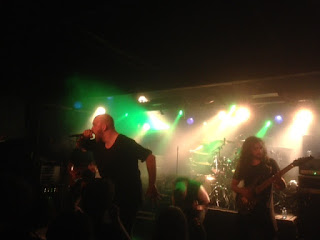 So short after 22:30 it was all over and I could drive home, by lack of trains. This driving meant no beers and a very clear memory of what great bands we had. This package deserves to sell out the remainder of the tour, as there simply is something for everyone into extreme and technical music. Not one disappointment and in Revocation even an out of league performance. Very good way to spend my Wednesday night I now consider if Patronaat becomes an option tomorrow for a similar package.
Posted by erikprogtricolor at 11:27