Two years ago I saw ReSolve play at the Plein open festival and they pleasantly surprised me with covers of Pull me Under and Undertow, while their female vocalist did not disturb the show with operatic vocals. Now they released their debut album, being performed fully in Musicon so a Saturday night well spent. First we had to go through Hillsphere from Amsterdam. This actually was another positive surprise. This young instrumental progmetal band played some interesting songs. A pity that string problems made them shorten the set with one song. As much as I do appreciate instrumental music as well, the standout song for me was the one with a guest vocalist. A heavy song with grunts and calmer parts, might make them consider to use more vocals in my view. Good band and show though. 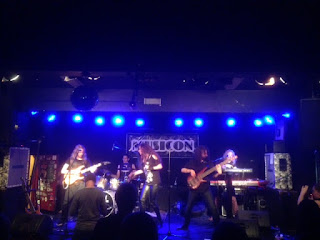 Then we had to wait for ReSolve. New technical issues made this last slightly long and the intro was broken off abruptly as well in order to solve some guitar sound problems. When the band was complete on stage I found out that they changed singer. Radina who turned out not to be Dutch had a decent voice, but to me she came over as the weakest link. This not to say that she was bad, but the band seemed again very good. Even with some continuos sound issues it was clear that instrumentally ReSolve is amongst Hollands talented new Progmetal bands. Highlight on the instrumental parts was the guitarsolo at the end of ballad Still Breathing. While the vocals were not (yet?) as convincing, we got a guest for the last song. A certain Yannick first needed to be found as he was having a shit (seriously). Hereafter he laid out the lyrics he was supposed to grunt which were not too many lines. But to his credit he showed much more comfort on stage as vocalist and tried to get some audience participation. 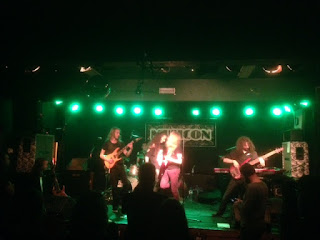 As this was their CD release show, all was over after last song of the album. So no Progmetal Classics covered this time. My conclusion was that The Hague now has a great new Progmetal band with CD in the pocket. I just heard their CD "Wayward Sanctuary" and can recommend same. After gaining some more live experience they should be opening band on a Progpower Saturday or Sunday afternoon anytime soon.