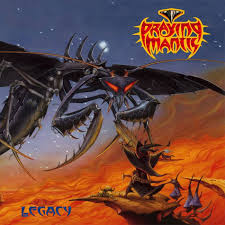 Releasing their debut album in NWOBHM days Praying Mantis always edged to the more melodic rock side than the dark and metal. Being big in Japan, they kept on recording new albums and here we have their latest album Legacy. For fans of melodic rock definitely one to check out. My main interest was raised when last year I saw Deo in concert. Both vocalist Jaycee Cuijpers and drummer Hans in't Zandt joined Praying Mantis. Being partially Dutch did not change their music though as it still is accessible melodic rock build around the guitar tandem Tino Troy / Andy Burgess.

Legacy basically gives us what we expect. There is faster work in "Fight For the Honour"/ "The Runner", midtempo epical songs "Against The World"/ "Eyes of a Child" and a ballad "Better Man". Those needing more references think of fellow British bands Magnum and the melodic side of Rainbow. As JC sings in Deo, a Dio cover band, there is no issue with the vocals really: powerful and with lots of variation.

Earlier this year I missed them live in Little Devil. Now I hope for some more partially home country shows as this should sound very good live. Epic cover artand logo should also result in interesting Tees.
Posted by erikprogtricolor at 21:50