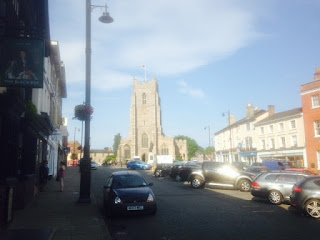 It is only once a year that you can see a show and realize that noone is going to top this one within the year. My best show of 2015 was performed by Trespass in their hometown Sudbury on a beautiful sunny Friday in Suffolk. Two weeks ago Hans & Mary asked me if I would join them with more friends to travel to Belgium for Graspop. I friendly denied as I explained that my priorities were for this show in an intimate setting and one has to make choices. Starting the Friday great meant that I could travel to England with a bermuda and T-shirts, with no need for bringing any luggage really as the Lightsmith brought us a lot of sun. Arriving in Sudbury this turned out to be a lovely town with a 1000 year old heart where I stayed at the Black Boy a few minutes from train station and venue. When asking for directions it is funny to anyone not British to learn you have to turn left before the cricket ground and leave the crocket field on your left hand side. Basically all in Holland so popular TV detectives could have been filmed in Sudbury. Arriving at The Quay a warm welcome for being one of the two foreigners showing up, by organizer Tom and some beers  got me ready to enter The Quay. Warm-up band where Ipswich band Invasive who leaned somewhat to Thrash metal corners and warmed us up well enough. 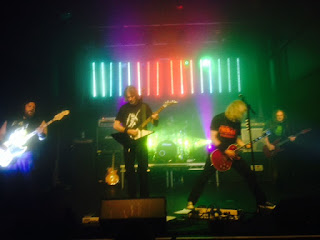 After a short break Tom introduced the show, explaining he saw them back in 1979 already, when they rehearsed at the very same place which now turned into theater The Quay. This show was all seated and with a rather large stage the ambiance was just great. All seated might mean no wall of death or slamdancing going on, but given the age of the fans who knew and appreciate Trespass this was hardly missed. As from the moment they came on, one could see that the band was at ease, the lightshow impressive and teh sound very good and clear. Being with three guitars and one bass on stage meant that a constant solid wall of sound was the base, with many harmony guitar solos flying over. Trying to remember highlights I actually believe we just jumped from one to the other. Their last CD with re-recordings of old songs was played in full, apart from maybe Bloody Moon. We also got in "Be Brave" and "Footprint in a Rock" two new songs. An to me unknown oldie "The Visionary" sounded great and the Head album was visited with "Stick in the Sea". If going to specific highlights I might mention Bright Lights, as it was one of the three songs I knew in the eighties (through taping radio show Stampij, when Holland still respected Heavy Metal on national radio). Lightsmith was beautifull and the double Eight till Five/Live it Up where metalling things up. Ending the show we got Stormchild which is such a great heavy metal anthem and a great way to close the set. One encore came in their hit "One of these Days". Seeing the long version live, makes you realize that the music business is so not fair, as this song alone should have made them a household name all over the world some 35 years ago. 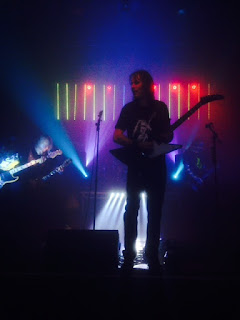 Coming to the sold out The Quay was such a good decision as I loved every minute of it. So my thanks go out to Tom (good luck with stopping the new road and your bicycle paths) and Paul who offered me a pub tour after the show. This gave as an extra bonus another rock show by Silent Divide in The White Horse, police advise where to get the best pint after midnight and just a brilliant finish to this Friday. Main thanks go of course to Trespass who showed to be live an even bigger force than on CD (which I now have completed buying Head before the show). Last year I tried to get Stampede to play Holland, which did not yet work out. As I plan to see Reuben Archer at Power & Glory again I hope to make some progress. Now I learned that Trespass should be joining for the perfect double line-up. No clue if I can manage to pull that one off, but dreaming never hurts.