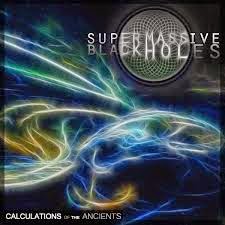 This one I have been playing for some two months now, which is a good thing since less then ten listens give you no clue what this is all about. The first song is called (sub-molecular) transmogrification of the oriphy, which looses all non-native english readers like me on the lyrical front. Then again, the mainly grunted vocals are also not ones you can really understand without the lyrics in front of you anyway. During the second song The Dyatlov Pass Incident their interest in Jazz comes out clearly. So far it all seems very intelllectual, while at the same time heavy as a really heavy thing. During the CD not too many verse-chorus-verse-chorus come at you and singing along would only be possible after at least another hundred spins. A short acustic instrumental piece is followed by even heavier Distance to the Great Attractor. Suddenly a slow banging of the head seems possible. And so we go on for this 35 minutes of different metal with loads of difficult words, textures and rhythms and all that jazz. The last song with the longest lyrics have them read out distorted over a slowly upbuilding atmospheric piece of music.

And still I love this album. Don't really know what attracts me so much in it, but I guess it is a welcome change from the more direct Heavy Metal, NWOBHM, or Neo Prog I listen to. Actually it is the extreme spectrum of progmetal, where Dream Theater alikes do not dare to go. Unaccessable, putting you on the wrong foot and changing styles all over the place I must confess that Mathematics of Emotions, does get under the skin indeed. This CD does challenge, annoy and intrigue me at times and has in Ghosts of Bhopal as a bonus one of the best songs I heard this year on it. Strange and beautiful these calculations.
Posted by erikprogtricolor at 23:06