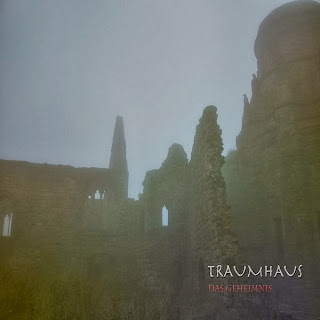 German lyrics in music, not my everyday need really. Then I went through my collection and found a pattern. Usually in November I find one album in German that fits the time of year pretty well. Autumn, wind, rain and cold do seem the perfect background for my albums from Janus, Dornenreich, Goethes Erben, Lacrimosa or The Scorpions (no that is not English Mr. Meine) Usually the before mentioned bands (apart from The Scorpions who don't know they sing in German) make a dark rock with Gothic traces. This year I found a new German Band which adds a new dimension to my collection. A beautiful progressive rock concept album sung in German: Das Geheimnis by Traumhaus.

After the relative short opener Das Geheimnis Teil 1 we get one of the best epics of 2013 in Das Vermächtnis. 27 minutes full of solo's on guitar and keyboard passing in a wave. It actually makes you think, what if they would sing in English, they might be "big" in Progland. Well the booklet translates the German lyrics, but like Scandinavian prog that makes little sense to me since reading along doesn't work on a translated version (apart from my arrogance to believe I actually do understand German reasonably well, hallo Mr. Carell) After the Epic follows a ballad and the only band written song Frei, which is more uptempo. Closer is Das Geheimnis Teil 2, which is an extended version finishing the CD in style filled up again by great solo's.

Traumhaus seem to exist many years, but only released 3 CD's so far. I heard their album first through Progstreaming after reading good reviews and it shows Progstreaming works. I followed their slogan: Hear it, Like it, Buy it. Anyone not bothered by the German lyrics and rather flat vocals, while appreciating symphonic rock with some progmetal leanings, should surf now to Progstreaming it is still available for free listening.