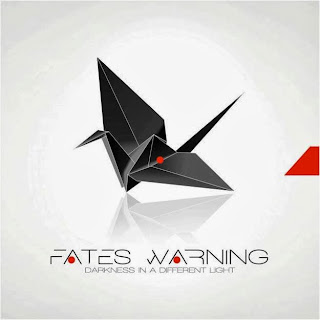 After nine years they release a new album, two weeks later they start their European tour with two shows in Holland to promote the new album and work sends me abroad. The hit was well placed and took some time to recover, but the album got me over it. So Fates Warning  is back and I can add with a blow. After their last albums showed some flirtation with electronics and special effects this time it is all about guitars.

The hurried opening riff of One Thousand Fires makes this one  that live should come over just great to get everyone started (as I won't know due to....) One off their better riffs ever and a great song to open. Firefly I saw live one year ago, but did not recognize immediatey. A catchy song almost as good as the opener. Desire starts calm, but then tempoes up during the droning in your own desire, after another duo like that the song moves heavier; great song. Then follows a ballad in Falling. Unfortunately a very short one, but what a voice Ray Alder still has. Such emotion makes this song absolutely beautiful. Strange enough his voice is the reason why many people do not rate FW that high. To me he is one of the (if not the) best vocalists around. The short moment of rest is followed by yet another uptempo song I Am. Probably the most catchy chorus to shout along: I Am tearing Walls Down. Lighthouse is about a broken relationship and has a dark melancholic atmosphere about it carried again by Ray Alder's raw edged voice. Lyrically it is also good to realize that the lighthouse always waits for you. Into the Black hits hard again for the contrast and has some off the better riffs of the CD. Kneel and Obey for me could be on FWX as one of the heavy songs, atmospheric yet heavy enough. O Chloroform adds Kevin Moore to the writers team and moves somewhat into OSI directions to me, untill vocals kick in that is when we are back in known territories. Closer is by far the longest song And Yet it Moves, but to me also the only disappointment on the CD. Not that the parts are bad (apart from the too long folky guitar intro) it just is not what you expect when you see Fates Warning including a song of 14 minutes. You hope on a new Eleventh Hour, Still Remains or APSOG and actually get very much like Marillion sometimes does several bits and pieces glued together, without being one epic song really. Still as I said the parts are OK, so nowhere near a deception to end Darkness in a Different Light.

This CD is supposed to go back to releases of the eighties and I can see what is meant by that. Still the catchiness and way of the last albums are also very present. The best conclusion can only be that it is a typical Fates Warning album, which means that hardly anyone shall release a better album this year There might be no epic song as we came to know and love from Fates Warning this time, but in return we do get various catchy heavy songs with an edge. Great album and while you get your copy go for the special edition. The extra CD gives an extended Firefly, Falling Further is a different version of the short ballad and in One and Life in Still Water we get the show openers from the last years performed live at Progpower USA.
Posted by erikprogtricolor at 22:09