Hypnos, Neoceasar & Signs of Algorithm - Musicon The Hague 13 May 2018 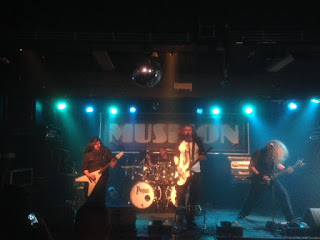 After a week full of gigs, why not close it with an afternoon session of Death Metal in Musicon. Being short the Signs of Algorithm are from Belgium and young. Their music is metalcorish, while the vocalist does some voice acrobatics like slam death. good seeing them jumping up and down the stage  while bringing us their songs. Next band were Neoceasar and while watching them bulldozering through their tight set again I realized this probably might be the band I saw playing live most times over the past twelve months. Regular good show it was.
Headliners were Hypnos from Czech Republic invited by Neoceasar as they told during the encore. This European tour consisted of four shows in Holland as well. This resulted in some Czech bangers as support. Rebuilding the stage completely on a tight scheduled afternoon, it was all worthwhile when they started. Older members resulted in one tight band and very good playing. If we add some decent songs a well spent Sunday afternoon was guaranteed. Supporting bands that surpised me and impressed I am now playing their last album The Whitecrow, with as bonus feature a free course of Czech with the translated lyrics, but that only makes my national champion Tiago happy. Bílá vrána. 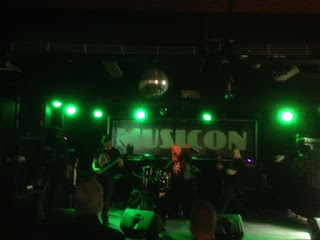