With an extended homestaying advice, why not discover more new music. Some tips 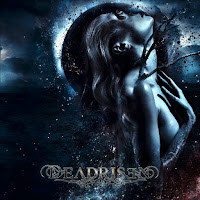 Deadrisen - Deadrisen
This might be to most yet another band or project with Mike Lepond on bass. For me this is a new album with Will Shaw on vocals. Last year I was one of the lucky ones seeing him on stage with Heir Apparent where he showed being one of the best voices in metal nowadays. I was unaware of the bands the other members came from, but it does not take long to realize that we have a topclass band together here. This is heavy metal as it is meant to be from the beginning. A majestic intro Risen Death A.D brings you to opening track Prophecy which tells you all you need to know about this album. All five musicians appear loud and clear, perfect production and some instrumental wizardry blended in a heavy monster of a song. I believe the album maintains that level throughout. Halfway there is a ballad for a breathcatching moment. Straight hereafter maybe my favorite of the album Visions, with some easter melody line in the mix reminding me of Stargazer (yes far fetched I know) Going through some other reviews main concerns seem to be that the album does not surprise and the metallica cover does not add a lot. My answer would be if they bring just what I expect in such a way I can't be bothered. Not every album needs to be highly original, or originality would become extinct by itself. And I can't remember last time I picked up a Metallica album, so For Whom The Bell Tolls sounds refreshing after a long time to me. One great album for Heavy Metal  fans who like some Power and Prog blended in at times. 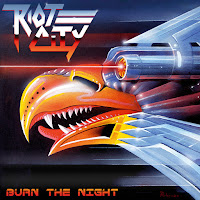 Riot City - Burn the Night
Riot City was definitely one of the bands I was looking out for to see at Up The Hammers. Then Covid-19 hit us and all was cancelled. I passed by the No Remorse shop in Athens on Thursday before flying out the next morning. I intended to get a festival Tee in support, but same had not arrived. So I bought CD's including this one, which I was going to pick up at the festival anyway. Riot City eats, drinks and lives 80's Heavy Metal. This with an overdose of high pitched screams throughout each song. Somehow I knew this would mean a total party in metal loving Greece. During a very eighties 37 minutes Riot City brings their message across in eight songs. Some might call it old fashioned, or true metal from the past. I love it and would expect a total party with this bunch on stage. Somehow visions of the legendary Ranger gig in de Nobel came back, when a full house jumped up and down to their old school speed metal of the new century. I do hope this band survives Corona and can cross te pond in better times again. Gotta love the artwork as well if you dig this metal. 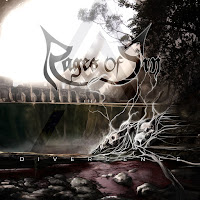 Rages of Sin - Divergence
Some people still say The Hague is not for metal. Well I beg to differ. With The Hague Metal Fest, MetalCon, 10 year White Room Reviews and Haags Metaal we would have had 4 great metal only festivals in town. This next to Kaderock and Schollenpop where metal and hardrock are always present as well, plus the ever increasing number of big metal bands playing Musicon. Further the number of local bands that have it in them to break through nationally and who knows what more seems to be getting bigger each year. In the extreme metal corner I guess Rages of Sin are my favorite local band. First time I saw them was on the legendary THHMA stage at Schollenpop. Since then I saw them many times and bought their EP. Now a new album was to be officially released at THMF 25 April. Sadly that event had to be cancelled, but the CD will be released anyway. As members of this band often walk around during metal gigs in Musicon I already heard this album would be hard to pin in one genre and I can tell no lies told there. While fast opener Defeasance holds even some slam death vocal acrobatics, second song Deference is mainly sung clean. Hereafter an Epic of over 10 minutes Defiance brings lots of variation within one song. Further on the album you hear computer bleeps, thrash, death, tech parts and even a sort of ballad to close the album. Variation is key on the album indeed, this while all songttles look exactly the same. One word, starting with a D and many words I had to look up before getting the meaning. This album is so well thought through it deserves to be heard by many. Seldom supporting your local scene was that easy. now bring on that CD release party as soon as venues are opened again.
Posted by erikprogtricolor at 15:28 No comments:

Some more music for quarantaine days 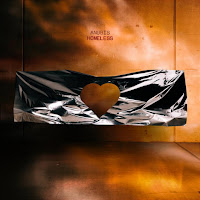 Anubis - Homeless
I follow Anubis since their debut album 230503 from 2009. This australian band plays neo prog with some 80's pop music seemingly blended in mainly due to the vocals. They managed to come to Europe twice and I am pleased to have witnessed two sensational 2.5 hour plus shows first in de Boerderij cafe stage and a few years later in 't Blok. In the past I called them already a hope for the future of progrock So yes I am a fanboy and slightly biased. Now they are back with their fifth studo album Homeless. When you thought that Anubis repeats the same trick, you are wrong. While all albums had something different to them, this definitely is their to the point straight forward album. Gone are the epics over 15 or even ten minutes. We now get 9 songs which apart from opener Reflective all last around four to five minutes. And do I like this compacter style? yes you bet. Because even in shorter songs, Anubis remain challenging and interesting. I can not really mention one favorite song, but suggest you give them a try and I meanwhile hope that 2021 can bring them back to Europe. 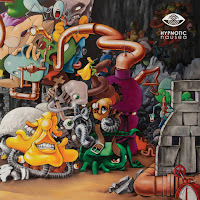 Hypnotic Nausea - The Death Of All Religions
It is interesting how I visited Greece, finding a cancelled festival and suddenly interesting Greek Progmetal bands find me. Hypnotic Nausea passed by me without me knowing and it turns out this was my bad. On their bandcamp page someone called them a blend of Queensryche and Tool. Well I can hear the latter mainly in the heavy bass being present. Queensryche not so much, also because that band did not release many long instrumentals. This album contains quite a few and even 11 minute opener Holy City almost hits the 8 minute mark before a voice kicks in. So is this mainly instrumental music interesting enough to keep your attention close? Yes it is, although it might not be for the impatient. When we arrive at The Priest this album shows it might also atract stoner fans. Actually that is also the case for some shorter instrumentals. The title track is where matters calm down, before final long song Inquietum Cor closes the album in style. This is a 2019 release, but the title of the album was predicting 2020. The Death of all Religions, seems to be right now that even in these days of world crisis all churches and mosques appear to be pretty empty. 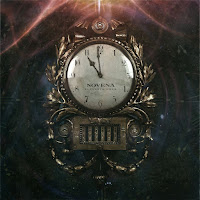 Novena - Eleventh Hour
I was drawn towards Novena as their vocalist is Ross Jennings of Haken fame. Well that is one of the vocals, as next to his clean voice Gareth Mason (Slice the Cake) gives us some grunts through the album. Apparently this band released an EP four years ago, but I missed that one completely. Further in spite of  members having a past in progmetal or even tech death this album is released on Frontiers Records, known for their melodic hard rock albums and keeping the eighties alive. I saw two clips posted by Frontiers for Disconnected and Sundance and thought lets try this out and I ordered the CD. Now hear comes the shock: Frontiers made some sort of inverse marketing campaign. The two songs  mentioned are by far the least interesting ones on the album. The last five songs are amazing and make this album a candidate for ending very high on my end of year list. Corazon, manages to  mix flamenco handclapping with a Spanish female vocalist next to very strong progmetal. Closing song Prison Walls is an epic, which might even have been stronger as it would have ended after the wild and heavy eruption atround the 11-12 minute mark. This album was a very positive surprise especially after the clips posted. Only comment might be the lyrics are at times impossible to follow with so many paralel singing and tiny letters over pictures, but that might just be old man me. Must hear album of the month.    .
Posted by erikprogtricolor at 09:42 No comments: