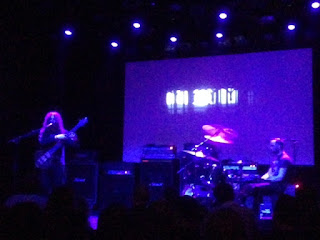 Bell Witch is not for everyone. at the same time it is easy to understand to all that Mirror Reaper has been one of the most interesting releases in 2017. A duo, playing bass and drums, releasing a one-song album of 83 minutes in slowly building doom. Grieving over the loss of former band member Adrian Guerra, who can be heard on pre-recorded vocals in The Words of the Dead. This album does get under your skin in its total sadness, so yes I was more than a bit curious how this would be brought to us on stage. This was also the week where internet told us that going to a show every two weeks might extend your live with ten years. Somehow I donot think that article was relating to this evening of total heavyness. When handing over my coat, the guy at the garderobe pointed at the free earplugs, as this was going to be HEAVY. Well I brought my own thanks. Also the life extending article mentioned the sense of belonging as a reason. Now I do agree that I like the company of many people I met during the years at gigs, but somehow I felt like not belonging in Patronaat last night. This must have been one the first shows in a long time where I knew noone, nor did I recognize a face in the crowd. Apart from knowing noone I also have no beard. Haarlem is this hipster city just off Amsterdam. Yesterday when I arrived before Feast started and entered the small hall there were some fifteen man alll having some sort of beard. The range was wide from I did not feel like foking shaving the past ten days, via goaty all the way down to Jihadi John. Now beards are common nowadays, but these all looked fashionably conscious and approved. So resuming I wonder how many extra days I gained last night. Hopefully enough to see Bell Witch once more, as they were sensational but more on that later. 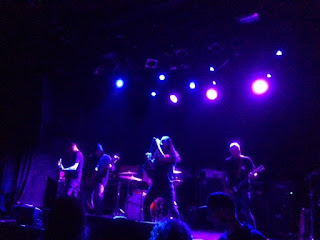 Opening band were from the area: Feast. They were the loudest band of the night as they did not necessarily reduce to soft intermezzos all that often. This Doom/Sludge was played so heavy, that you felt it hitting you in the stomach. I am afraid my scar wound opened up another two cm. Still as a life band I quite liked their performance. No nonsense just burn the place down and everybody in it. I believe they played four songs with the last one called the Bible if I understood that correct. Which was a nice touch as it was Easter after all. 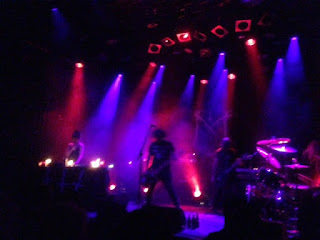 Monarch!are French and brought us a show. I mean the curtain closed inbetween the bands in the small hall and the stage was reorganized. When opening the drums were on our right end of the stage and could be watched sideways. On the left a table with many candles burning, a black cloth with some upside crosses. Two guitarists at the back of the stage and centre stage the bassist vocalist. Well vocalist he grunted/screamed at times with huge echo on it. From below the table a lady appeared, called Eurogirl I just read. She started whispering to us in French and slowly building up in volume. Than it became clear that the hero of the band was the drummer. He kicked of all the time when it was time for heavyness. Usually by hitting two cymbals and bassdrums. He than would bang wildly (animal) joining his slow and very heavy play. And when they switched to loud mode, they were loud. Mixed with a slowness this was just great. The show was upped by some of the details. The bassist had at the start five bottles of Heineken in front of him. Wen the girl claimed here moments and started drablling in French he had no role. So out came the bottle opener and he picked a bottle in order to throw it down his pipe in two gulps. So in the set of about 45 minutes? all bottles were emptied, which made hime the heaviest drinker in the hall. I know as I stood near the bar and noticed it was never rush hour. At the same time Eurogirl would disappear behind her table at times as well. At one moment I saw a hand with a bottle above the table going down, so she may have finished a same amount, but is still in denial phase of her friend alcohol. This show flew past as there were details like above to watch and the songs seemed to be merging into each other. At a certain moment Eurogirl moved to accented English, when warriors were invited to come out and play. But this was not about the lyrics or songs, but the total experience, which was good. For me no music to buy on CD, as I do not think this works that well at home and who knows it makes you more thirsty than is good for you. 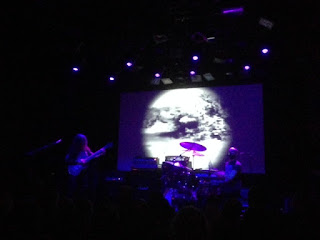 Bell Witch is Dylan Desmonde on bass/vocals and Jesse Shriebman on drums, hammond organ and vocals. I am now some twleve hours later and still questioning myself: How do they do this??? We got the first part of Mirror Reaper (As Above) played for us. Dylan opens with his six string bass and Jesse seems to be asleep on his snare-drum. Even with bass alone the music sounds massive. In order to increase the impact we get black and white movies on the screen behind them. I have no clue on the lyrics of Mirror Reaper, nor do I know what they tried to state with the at times interesting images, but I was sucked completely into this show.  When Jesse joined the heaviness of the evening was restored and at times I was surprised by the vocal parts, which moved ranges up to Black Metallish. Seems that I played Mirror Reaper a lot as I could hum along with large parts of the music. It stayed all the way through just amazing how the two of them could create this all on stage. I saw that Jesse had some effects to his disposal, but still. No songs, no interaction with the audience (like the whole evening) no guitar solo and yet one of the best shows I witnessed in a long time. As this evening was a special one with Easter and April Fool's day combined I did appreciate it that they did not treat us on a hologram of Adrian Guerra to fit Easter and surprise us. The only conclusion can be this was an evening of art and not a metal show at all. Now when As Above was finished the show was over as well. One might say that 50 minutes is not very long, but this show was intense on all the senses so I was pleased as it was. Bell Witch shall return to Holland ths month when they end their European tour with two shows at Roadburn. Now I am in Portugal those days, but they shall play Mirror Reaper in full on one of the days. No need to repeat that I can only recommend all to see this. Also Progpower might raise an eyebrow. Given the success of Nordic Giants two years ago, this might be a heavier/doomier version of that, which should please half the attendants as well. I am now listening to their previous album Four Phantoms. It contains Bell Witch short songs as we get two songs divided each in two parts in 65 minutes. What a great band they are, being two only.
Posted by erikprogtricolor at 10:50