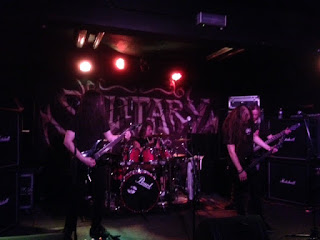 Solitary playing Musicon organized by THHMA was announced long ago. As things go, with time other shows were put around this or at the same date. At one point in time I also considered going to the Raven/Hirax package in nearby Baroeg the same evening. Yet my decision where to go was based upon some simple principles being: In case of doubt always support your local show as you want more of those; Bands you never saw go over bands that stop over more often and I saw recently; Internet search proved to me that Solitary sounded very good indeed. So when bumping into Arian and speaking about this gig later on I even learned there was a possiblity to re-open my HM B&B for the night. Knowing all this I even ordered the last album together with their book (!) I Promise to Thrash Forever. So I knew what I was in for. 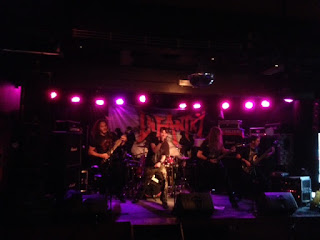 Arriving June 10 it's a lovely summer Saturday The Hague was recovering from a rather overwhelming I Am Morbid show and Solitary arrived from a succesful gig at Backstage in Nijmegen. At Musicon the guys from Infantry arrived together and preparations could start. A very good looking merch table, great banners at the stage, A free CD for visitors, so let the crowds come in. I short-cut here a bit and mention only the word disappointing. This did not stop Infantry from giving us a very tight set again. I saw these guys before opening for Anihilated and learned that this was a reason they were asked to open tonight as well. Their Death/Thrash metal fitted well with Solitary and in this genre they must be one of the better bands around in Holland. What gives a nice break is the intersong chat being rather dry humored and calm, followed by the next heavy assault to the body and ears with a grunt to match it. I guess they shalll be back more often, hopefully on a busier day. 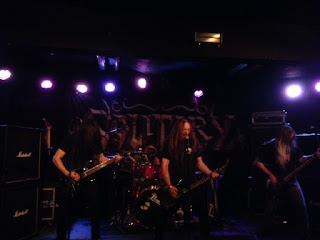 A nice moody opening track announced the start of Solitary. I did get a look at the setlist afterwards, but noticed they did not follow that fully, so I have to talk from memories here. I believe they opened with Trigger Point Atrocity. I could not hear anything from the so-called throat issues of Rich and one could see that this band is around for a long time. We got one fast thrasher after the other fired at us. With most songs being fast one song that did not make it in the end to the set was my favorite of the album Anthem of Regret, a heavy grooving monster. With this being their first tour abroad Solitary included some covers in the set as well. Earlier on we got Into The Pit a song also recorded on their Requiem album. In the encore they shortly returned to the time they played some big four sets in the UK. So we got songs from Megadeth, Slayer and Metallica. For those in doubt on their talent, these covers showed what an amazing good band they are. All four nailing it completely and even Rich covering a range from Peace Sells... to Damage Inc seemingly effortless. In the end the conclusion could only be that those who were present got blown away by a great metal band. Solitary proved to me again that nowadays it is much more interesting to follow some underground thrash metal bands, than remaining focussed on the big four. I am sure this was the start of something growing bigger as word of mouth should in the end result in more and bigger. What I could read so far, those in Nijmegen also were more than a bit impressed, so we hope for a return to Holland. Hosting the guys I got to see the other side of touring as well, filling up the trailer after the house is empty, needing a late drink to relax and driving on the right side of the road. The Sunday was calm and relaxed and I could through a small city tour maybe convince them that The Hague is worth returning to. Thanks to THHMA and Musicon for the evening and most of all to Rich, Andy, Roy and Pete for an interesting weekend. 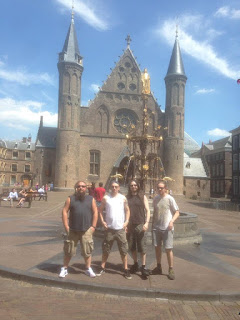