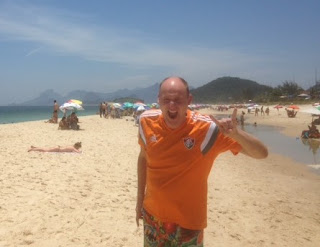 Tonight we close the year and I am in Piratininga (Niteroi), with Copacabana on the background. As the biggest fireworks of Brazil take place over there we shall watch it from the back, which probably results in watching a smoke screen from far again. Musically I have to put earplugs in avoiding all the worst Brasil has on offer here with Pagode, Funk, Samba and other non rocking styles.
This year we lost our oracle Johan Cruyff who said every disadvantage has its advantage. I used the fact that Josie is working in Portugal and work trips are at a low due to the ongoing FM situation for seeing shows. Ending with an average slighty above one a week and including international shows in Spain, Portugal and the UK I can not complain. As a result it becomes harder to choose favorites, but I managed to make some decisions. Honorable mentions should go to the following bands that did not make the cut: The Contortionist, Dirkschneider/Anvil, Evergrey, Ne Obliviscaris, Iamthemorning and Headspace. I let at times emotional ties speak as well, which created some preferences. Herewith the ones that made it to my favorite shows starting at 16.

16. Warrior Soul - Musicon 26 March
Not much of a voice left, this was one long ride through songs I knew for years. The Losers remains one of the best ballads ever and the band was good.

15. Loudness - Gebr de Nobel 16 June
It must have been some 31/32 years since I last saw Loudness at Arena Rotterdam. Akira remains a hero on guitar and we are the Loudness guys!!

14. Tokyo Blade - Baroeg 8 October
Part of Rotterdam Rocks, the highlight to me was the Tokyo Blade show. They stuck with their first albums and this made the recognizing effect only better.

13. Borknagar - Baroeg 24 April
I already loved their album Winter Thrice and then alive it even got better. Warmed up by impressive Kampfar a great performance form the allstar band who all sung parts of the show.

12. Queensryche - de Boerderij 29 August
While Geoff Tate gave in December a nice acustic show, the real metal versions always prevail. Focus on the 80's. Next time they can choose the songs they did not play this time so for years we should be OK with Queensryche.

11. O.R.k - de Boerderij 17 February
Probably the most surprisingly underrated show of the year in a near empty Boerderij. Drums from King Crimson, Bassist ex Procupine Tree showed that names do not always attract an audience. Yet their show was beautiful.

10. Satan - Gebr. de Nobel 14 May
While we were warmed up by bands that had nothing to do with Satan, they came on strong and convincing. Satan is this NWOBHM band who can fill their show with new songs as their last two albums are as good as the classic debut album Caught in the Act

9. UFO - de Boerderij 6 November
Building there show around the best live LP ever made this is a guaranteed winner. Phil Mogg still good by voice and Vinnie Moore brilliant in the solo's we know note by note.

8. Sodomizer - Musicon 2 December
Sodomizer representing here many underground bands I saw in the area. As they stayed at my place this one became more special. These small shows are many times much nicer than the larger events and when the band turn out being nice people it was one great evening.

7. Vektor - Little Devil 19 August
My favorite album of the year performed in full. Well almost as the power went off and there was no way to get that back in steaming hot Little Devil. What we saw was impressive enough to make me look forward to many Vektorian returns.

6. Mearfest - the Borderline 13 August
Charity combined with NWOBHM organized by very sympathetic Brian and Clair Mear. As time was short the shows would not ente my list, but the overall atmosphere and mood at the venue definitely made this one memorable evening. Best bands to me: The Deep, Sacrilege and Kaine.

5. Tribulation - Gebr. de Nobel 28 January / Beyond Creation - Patronaat 23 October
A double nomination for my favorite extreme shows of the year. Tribulation giving us a different performance based on good music and Beyond Creation probably the best Technical Death Metal show I saw in years.

4. Wolverine - Sjiwa 2 October
Wolverine representing Progpower here. While at the festival I was also much impressed by In Mourning and Sadist this band proved once again how to make top class moody progmetal. Best voice of the festival and this was such a show that made me appreciate their last albums even better.

3. Oceans of Slumber - 013 7 April
Having a short slot they did overwhelm completely. Live the swap between voices and impressive instrumental mastering came over even better than on CD. I saw them return later in the year at the same venue with much better acts next to them in Enslaved and Ne Obliviscaris, but missed half their set due to traffic. Hope to see them perform a full set in 2017.

2. Trespass - Musicon 31 July
Having breakfast at home with the band that gave me One of these Days and Stormchild over 30 years before was very special indeed.The set was showing similarities with the one I saw the year before in Sudbury, but only good songs. Looking out for their new album in 2017 and they are more than welcome at home if they return to Holland.

1. Iron Maiden - Sevilla Olympic 14 July
Not a very original choice maybe, but I do not see all their tours any longer. This time going with Tiago in sunny Sevilla was one of their best gigs ever. Standing hands on shoulder with Tiago and shouting along the OOh-who-hooos during the Red and the Black was a moment I shall never forget.

Wishing everyone a great 2017, hoping it brings as many great shows to us as 2016 did. So keep on Rockin' in the New Year.