Monday evening in Amsterdam, tropical temperatues and mid summer school holidays. Not the ideal conditions for a Heavy Metal show, but the double Queensryche/Armored Saint attracted a decent crowd to the Melkweg anyway. Both having their career high some 30-25 years ago it showed in the crowd as well. When you compare modern metal bands with the quality on stage tonight it is sad that very few people in their teens/twenties were present, but I do not see a way to reverse this. For the older people that did show up we got two amazingly good shows and just an evening of Heavy Metal at its best. Warm up band Beyond the Black I missed, so soon after arrival the real work started. 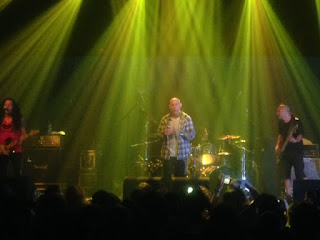 Armored Saint opened with Win Hands Down, title song of their last album released some months ago. This was a good choice as it showed that the new album is as good as previous work also in a live setting. Actually to me the Armored Saint show was one trip through time amd space as they are not a band that I did see a lot, but I have most of their music. The only time I saw them playing before was at Dynamo Open Air in 1991. I believe that in their CD review I already called their music dance music, as it is heavy with a tremendous groove all the time. Live it simply is not possible to stand frozen and watch. Highlights all around in The March of the Saint, through Raising Fear, Pay Dirt, Reign of Fire to Madhouse. Special mention deserved by their best song ever Last Train Home in a killer version and the next generation joining on guitar/vocals during Can U Deliver. This show just passed with a smile on your face and so many good songs to keep the atmosphere at high for the full time. Probably one of the best shows I shall see this year and the question even became would Queensryche be able to follow this one up? 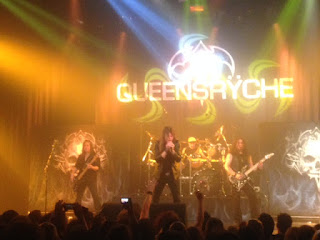 Opening with Anarchy-X and the Nightrider we were immediately remembered that with Todd La Torre at the helm the highlights of the eighties are possible live again. On it went with Breaking the Silence. OK, the surprise was not as big as last time when we saw the old songs perfromed brilliantly again for the first time in some 20 years. Still the setlist could not disappoint, but something was hindering the show. So when Todd la Torre mentioned that a cold and fever was really making things hard for him we realized that we were right in hearing a lack of power, as well as relieved that there was a reason for this. Stilll he fought himself well through the remainder of the set, while unfortunately same set was drastically cut short. As we have to appreciate the fight, what we got was really good and Arrow of Time did make me look forward to the new album. The split now defintely resulted in one great Queensryche and one Operation Mindcrime. While we saw confirmed that we can expect lots of good to come from the first one, the latter still has to convince us which might happen soon on CD.