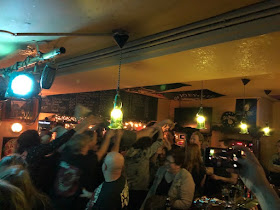 Toxik and Lazarus the ever strange match that works soo well. Toxik should be and is far too big to play metal bar Lazarus, yet on their last visits to Europe they managed to squeeze one show in and it tends to become legendary when that happens. So on a Sunday night I was back in Lazarus to see a topband sweating on a tiny stage while having a few beers. Peter this time joined me, as last time he thought I was joking when I stated Toxik played Lazarus and did not turn up. With Marco joining by train, Pieter arriving late we were well positioned at the side of the stage. Now in Lazarus and the tiny setup one can not expect a perfect sound really. This is more than made up for by the overdose of atmosphere. 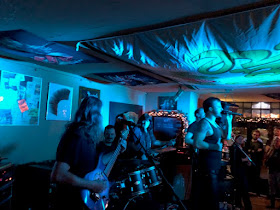 Openers on this tour are Begian/Dutch Thorium. I saw them at their first show ever at Wizzfest and also open for Q5 in Little Devil. I liked both shows and was rather pleased they would open the evening. Where Toxik play technical thrash metal, Thorium are grounded firmly in the eighties and play traditional metal. I like both styles, but to some maybe not fast or loud enough. Well slowly but surely they won over Lazarus and when close to the end Savatage was covered all seemed to like them. With the great voice of David Marcellis coming out of te speaker right next to us. Their very Maiden inclined metal this time even made me buy their debut album and I keep an eye on the follow up to be recorded soon. So warmed up we were. 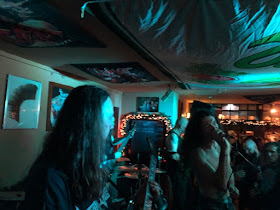 Then after a short break, where the merch stand was to be visited, with a killer new T-shirt brought along, Toxik joined the tiny stage. This time they were 5 as they have an extra guitarist in Dutchman Erik (what's in a name). First very comforting fact was that to me new live vocalist Ron Iglesias (what's in a name part 2) did convince. He has the power and the screams to accompany the mostly fast songs. I say mostly as we got this evening the 5th ever performance of There Stood the Fence as well. This being part of Think This the album that made 30 years this October and was now played in full. This was done in original LP version with after some  songs Side A and then an old song break before Side B would be played in full. Toxik released two classic albums in the eighties with a slightly different sound. I like both and do not really have a preference for either World Circus or Think This. Well in the end World Circus also almost got played in full. So when this was all going on we did get stage divers in small Lazarus, inlcuding vocalist Ron going back and forth through the place. The band seemed very good, even though Josh told me they were not expecting this after a heavy drive down from True Thrash Fest in Hamburg. To up the party atmosphere of this special evening it was the 50th birthday of Tour Manager Dennis. So when all was done, he joined on stage this time not to sing but drum along War Pigs, which got a surprising good voice from the crowd to sing for us. Closing in style this evening was a party and one we shall remember long time again. This week you can still see this package in Germany and Belgium, plus a return to Holland. I won't make it Thursday in Zwolle, as I support the local scene that evening, but hope I find some ongoers to Dynamo on Saturday. The only risk I agreed with Ton on afterwards, was that a normal gig on a proper stage can never beat this atmosphere. Yet with such a perfromance some effort from my side is deserved for both bands. Killer evening it was. 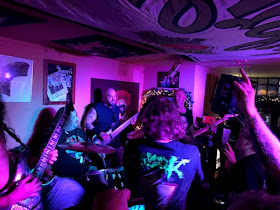