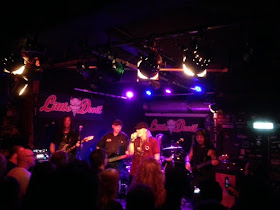 Q5 are touring Europe and would hit Holland for the first time ever. This did somewhat surprising not make major waves in national press. Apparently dividend tax, gas blockades and Pakistani protesting against a Dutch cartoon competition were more important. Whatever, when Hans and I heard of this news it was reason for a loud cheer. Who doesn't remember the impact Steel the Light made on us in 1984. At the time we still shared bands due to scholar/student budget. So Hans had the LP and later When the Mirror Cracked. The second LP I  bought as well when Hans already moved out and Steel the Light I once met cheap on internet and hold on CD. These two albums are absolute classics for those loving their metal blending the Melodic, US Power Metal and Hard rock in wonderful songs. When also my friend Andy takes a plane from France to Scotland to see them and sends me an enthusiastic message on the great show they gave in Edinburgh hopes for something special increased even more. So in order to prepare ourselves well we decided to take an early train and have some beers over nice music in Little Devil. Well nothing better than NS our national rail to frustrate your plans, so the warm up beers became one only. Finally I had a certain deadline as Josie was flying in from Portugal, so I wanted to arrive home not too late nor legless (which I managed both). 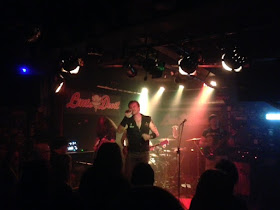 So when we just settled Thorium came on. This band from Belgium with Dutch vocals made their debut in Holland as well. Yet I saw them earlier this year at Tribute to Wizz and liked what I saw at the time. Thorium is a metal with the element called after the god of Thunder Thor. So what do we expect, indeed power metal. The Helloween T-shirt of one of their guitarists gave away one influence as the opener sounded pretty much Helloween during Keeper times. Next to that also some Iron Maiden second half eighties influences are very present. This became even clearer when they covered Caught Somewhere in Time. If you cover Maiden why not take one of the more original ones like this. I think I never saw this song live since the Somewhere in Time tour of Maiden. That tour had WASP supporting, which brings us to Thorium's bassist who is Belgium's answer to Blackie Lawless in looks at least. Well Thorium shall release their debut album 5 October and after this show I definitely recommend checking the album out. Good band with great vocals and some nice songs especially if you like your metal of 1986. 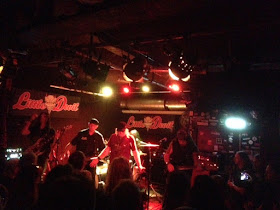 A short break setting the stage and Q5 kicked of their show. Jonathan Scott K. asked if we were in for a party. Well we were and so was Q5. Kicking of with Let Go from the Mirror album it is that feeling of checking how a band you loved and never saw live sound on stage. Well no issues there although throughout the set some adaptations were requested, it all sounded pretty flawless to me. After Let Go the Mirror album only came back with the title track. Steel the Light on the other hand was played completely although not in running order. What a party indeed to hear songs like Pull the Trigger or Missing in Action live. I never realized that there is also a certain AC/DC edge to these songs, but the screams reminded me at times. Apart from the classics we also got a few songs from their 2016 album New World Order. As they were big in the eighties there was a ballad, but not a love-ballad, as Come and Gone  describes the very end of it. During the set we also learned again what Ain't no Way to Treat a Lady, when slowly we came to an end. And what better song to close the night than the title track from their debut. Steel the Light was already a great song and seeing it live now, meant it promoted to this list of all time Classics you love to sing along to. How wonderful a full Little Devil was shouting along with Steel the Light and even louder Turning Darkness Into Light. So I thought it was over, but the band came together for a reunion on stage. As if they decided there and then, that this special night deserved an extra, we got a bonus. This was new song Tear Up the Night. Well what to say about this excellent set and evening. One to remember for sure and how good to see a band surpassing your expectations. Hans looked for Steel the Light on CD afterwards, but it was sold out already. Guess he picks up an LP at home this week. I rushed of to catch a train and meet Josie at home, so I missed the fact that after his wedding anniversary at Armored Saint three weeks ago, Michel now celebrated his birthday. Might explain why he thought it a good plan me arriving home late and not sober. Sorry but no. Finally thanks to Mario for getting Q5 to play Holland and he announced today they want to come back. So shall I, as how great is it to see a room full of people in their forties, fifties and maybe sixties singing along they are Teenage Runaways!!
erikprogtricolor at 13:08
Share