During my stay in Portugal this month we passed a weekend in Lisbon. That included an obligatory stop at my favorite CD store Glam-O-Rama for an update of could Portuguese metal releases. So herewith two recommendations. 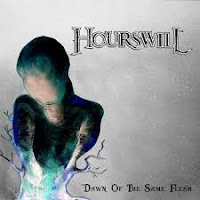 Hourswill - Dawn of the Same Flesh
Hourswill are probably of all Portuguese metal bands my favorite one. They play heavy metal with progressive power traces and were on their last album often compared with Nevermore. I can hear where that is coming from although a slightly less aggressive version they are. If we are name-dropping the new album made me think at times next to Nevermore on Evergrey and Tomorrow's Eve. Dawn of the Same Flesh is a concept album (very prog indeed) about the state of the human race. Humanity get a new chance and messes things up again is a short recapp of the story. In the end it is about the music and I believe this album after a few listening sessions even better than predecessor Harm Full Embrace. Bookended by the two calmer songs we get some very catchy progressive power metal songs. Outstanding upon first hearing is the very strong voice of Leonel Silva. Then when the story opens you get overwhelmed by the catchy songs with the hooks and melodies working so well. If there is a highlight on the album to mention it must be epic Benightenedness followed by I Vow to Hate. This aggresive bridge occurs not coincidentally when at the story things start going seriously wrong again. This album deserves international exposure. I so far never saw Hourswill playing live and missed them by a week this month. I will correct that in 2020 and if PPE ever needs a Portuguese band to join their large country of origin list Hourswill might be just the band they are looking for. 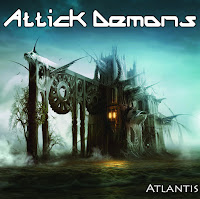 Attick Demons - Atlantis
Is it possible not to mention an influence when each and every song strong reminds you strongly of them? I guess not, so resuming Attick Demons we can say Iron Maiden, but then without Steve Harris calm intor's and outro's. Does this obvious inspiration matter? No not at all since Attick Demons just gives you good and fast metal songs. Mostly around 5 minutes these songs ooze Maiden so much that the band even hold three guitars. I should see them live to judge if this adds something, or two would be enough, so that is Maiden again. I should mention vocalist Artur Almeida as his voice is great and makes them stay close to their examples. So is this Portugal's most original band? definitely not. Would I love to see them live one day? definitely yes. The album contains on the title track two special guest musicians in none other than Paul Di'Ánno and Ross the Boss. Only downer the female soprano killing nice song Meeting the Queen, but that might be my personal problem with female sopranos in metal. Good band and live they should present a party.
erikprogtricolor at 11:56
Share