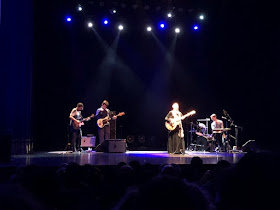 So it was our wedding day and we decided to celebrate with a live concert. So far so good, but the friend of Josie who called the fact that Adriana Calcanhoto was playing in Beja proof  that coincidence does not exist was exagerating too much really. I strongly believe in coincidence and if it would not exist, we would have had Fates Warning playing Beja that evening. Anyway Adriana Calconhotto it was, a Brazilian singer songwriter with band on tour in Portugal. This kind of MPB music was suitable as it brought us back to our Brazilian years with live music at the legendary Feijoada's do Ruy or the summer live shows on the beach. I am no fan of MPB really, but it brings some good memories back. The band tonight was good (especially the drummer) although they were not allowed to leave their square meter it seemed. Adriana herself can sing, or is it more reciting of her sad lyrics really? This evening seemed to be all about the sea, the ocean our planet and of course lost loves. After the show I called it music for and by women, but that was consiederd macho thinking by Josie. All in all some good performance and an interesting evening of live music. This in spite of the boring all seated venue. Earlier this year I saw in Lisbon the by far worst Marillion weekend ever due to all seated and poor setlist (oh yes and no decent bar). this evening was as bad on interaction between stage and audience. Most atmosphere came when stagehand fisherman in his yellow raincoat ordered the hall to clap along. Well everyone around me seemed to love it, so no judging here. And then we walked home and bumped into Beja Castle. Suddenly Swords & Tequila got stuck in my head and we ended the evening with a musical highlight after all. 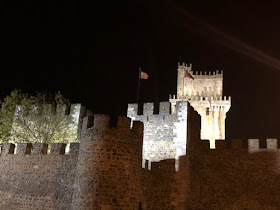