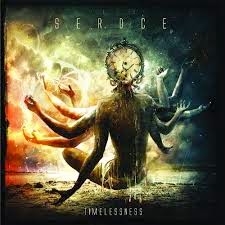 Progpower 2015 announced it's first 6 bands and I had a quick listen at the to-me-unknown bands. Serdce was the name I even never heard of, in spite of releasing 4 CD's already. Maybe the fact that they are hailing from Belarus had an impact on this. Further references of Cynic and Atheist definitely drew my attention and soon I listened to a YouTube version of this album. It took me 5 minutes into the CD to order my copy through bandcamp. And now playing the original album on headphone again, I can say I found a new favorite of 2014.

The album opens atmospheric and when the text comes in, it can be noted that the band does not speak English every day, Mentioning the vocals, I am still in doubt if this album would be as good if fully instrumental. The vocals range from clear and light to death grunts and as they received help on translating lyrics, they sometimes seem less comfortable to sing out loud really. But after some listens I got used to the vocals and the package is complete now including vocals. This does not take away that the absolute highlight of this album lays in the sheer brilliance of the instrumental parts. The range is wide from piano bits, to technical death metal riffs, but the constant factor is the high level playing.

I don't really have a favorite song on this album, as even within songs Serdce can go all over the place in emotions. I do know that I am already looking very much forward to seeing them play this in Baarlo almost 10 months from now. Not sure yet if I am going to get earlier albums already, but wait how I rate this CD some three months from now. Actually with the beautiful artwork a T-shirt is also on the list for Baarlo. And then they come from Belarus!!! Metal unites the world indeed (he said when continuing looking for the new CD of mainly Indian band Skyharbor). Serdce; I hope they shall face no visa issues, when conquering the world as this should be heard by millions.